Backbreaker was released on June 1, 2010, for both the PS3 and Xbox 360.  The game released with a MSRP of $49.99 and features 60 football teams, a season and "Road to Backbreaker" mode; as well as an online exhibition mode.
One big selling point for Backbreaker, is its use of the Euphoria game engine, which was also used in games like Star Wars: The Force Unleashed and Red Dead Redemption. 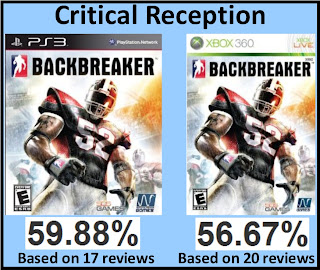 The chart shows, with the lightning bolt, that on June 2 IGN.com posted their review for Backbreaker.
I believe their review was posted around 8:30PM(EST) on June 2, and they gave the game a 5 out of 10.
Many other sites started posting reviews for the game on/around June 1, but I just found it interesting that after June 2, the same day IGN.com posted their review, the sale ranks for bother versions of Backbreaker steadily decreased.
Thoughts:
I have not purchased a football game since ESPN NFL 2K5.
I read some of the comments on IGN's review for Backbreaker, and they were stating that the reviewer did not spend enough time with the game; before writing the review.
I don't think the Amazon.com sales data shows the game is selling very well, but perhaps it is doing better in retail stores than online?
I think if the game released with a price tag of $19.99, like ESPN NFL 2K5 did, then more people would have been willing to give it a try.
I did download the demo for Backbreaker on my PS3, and played a few matches.
The passing took a little while, but I was getting used to it.  I still am adjusting to the running, though it seems kind of loose to me.
Here's a trailer for the game, and also two plays at the end of it from some of my play-time with the demo:
Questions:
Have you played Backbreaker on either the PS3 or Xbox 360?
If you purchased the game, what do you think of it?  Do you agree with the review score averages for the version you played, or do you agree with comments that the reviewers needed to spend more time with the game before "reviewing" it?
If you are interested in Backbreaker, you can see prices for it on Amazon.com below:
Posted by coffeewithgames at 4:17 PM