Quick Brew Info:
BlackLight: Tango Down is being developed by Zombie Studios and published by Ignition Entertainment.
BlackLight is a FPS game that will be available for download on the PC, PS3, and Xbox 360 this summer.
They are aiming for BlackLight to be around $15 when it releases. 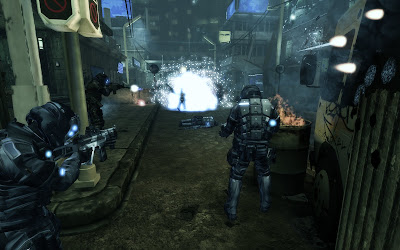 (New meaning of getting lit up?)
CoffeewithGames:  BlackLight: Tango Down is releasing on the PC, PS3, and Xbox 360; will there be any differences between each version(Achievements/Trophies, levels, modes, number of players)?

Jason Hughes:  The consoles are the same, as for the PC [version] we gave it some extra love.  The textures are higher resolution and other treats are put into the PC.  We didn't treat the PC as a console port at all, like most do.  I'm really happy how seamless all the versions have came out(PSN,XBLA,PC).  We really tried hard not to make one better than the other, they all have their own goodness and issues.

CoffeewithGames:  The Sony Move controller is releasing later this year, as is Microsoft's Natal, will BlackLight support either of these?

Jason Hughes:  Nope, I want to come home from work and play BlackLight and not have to jump around my living room while my dog looks at me crazy.  I'm really not sure what will happen once they come out.

CoffeewithGames:  Does BlackLight take inspiration from the Call of Duty games or Battlefield games, in areas such as level designs or weapons?  Perhaps also in the multi-player leveling?

Jason Hughes:  Sure we used both as inspiration and really learned a lot what worked and doesn't work.  Both are great games that we've played the h*** out of.  It's funny that everyone asks me about COD and BFBC2 all the time.  People forget to bring up Halo, Half-Life, F.E.A.R., Daikatana, and other really amazing shooters.  I know I've been influenced by every game I play.  I've even pulled from non shooters for BlackLight.  Racing games are the real imprecation of the weapon customization system.  Even Saw being developed by our sister team here at Zombie gave me the idea to add mini games in the control system. 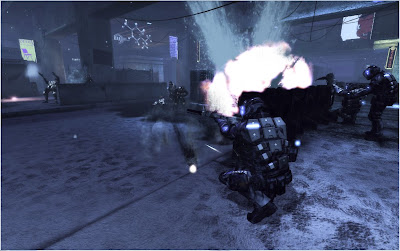 (Digi grenade, or frag?)
RespawnAction:  How drastic will the weapon customization affect each gun?  Will it be pretty noticeable gameplay wise or is it mostly aesthetic like Army of Two?

Jason Hughes:  All the items change the weapon, but they don't make the AI mad at you or anything like in Army of Two: Two.  We really want players to tweak the way the weapon works with its attachment.  The art team really did a great job making the weapons look really cool too.  So sometimes I do make guns that just look cool and deal with weapons issues.  We want it to all be up to the player.

RespawnAction:  How varied is the co-op mission structure?  Will it just be an "eliminate all enemies" kind of thing?  Or is there more depth to it?

Jason Hughes:  I wish we made it easy like that, BUT we didn't.  The player moves through the levels completing objectives with their team in Black Ops(COOP).  The idea was to make the missions fun and move the player around.

RespawnAction:  How did you guys manage to pack all of BlackLight into a DLC title?  Was some content left out due to size limitations?

Jason Hughes:  Not at all, we really didn't run into any issues with our content, the art and design team did a great job keeping up under memory.  The PC will have a larger download because of the higher resolution textures.

RespawnAction:  What are the multiplayer details?  Number of maps, gametypes, etc.

Jason Hughes:  12 maps, 7 game types, and a ga'trillion'gazillion weapons combinations.  We built a range of maps, from size to play style.  Players should have all the flavors they want in gameplay.  From long sniper allies, to shotgun close quarters combat.  We didn't make up any new game types in Tango Down, we wanted players getting the game to get into the game and not have to figure out what to do in the game type.  The whole idea has been, simple to pick up and hard to master.  HRV is the big game system to learn and master.

RespawnAction:  Who has the better visor?  Samus Aran in the Metroid Prime series, or a BlackLight soldier?  Haha.

Jason Hughes:  I would say Samus has a better-built heads up display, she never blue screens.  But the BlackLight soldier can really do some damage using the HRV! 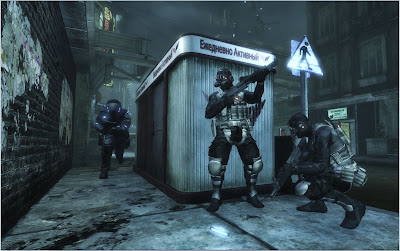 (Hide and seek?)
CoffeewithGames:  Will there be a playable demo of the game on the PSN, Xbox Live, and PC; like the Battlefield 1943 demo on the PSN?

Jason Hughes:  Yes, we'll have a form of a demo for BlackLight.  It will give the players a good taste of the game and let people see why they should get the game.

CoffeewithGames:  About what percentage of the development team drinks coffee?  Do they drink it black, or with cream/sugar?

Jason Hughes:  I think everyone drinks coffee other than me.  I always hear guys yelling at each other about not making coffee after they take the last cup.  We really need a Terry Tate office linebacker.  I'm a Redbull guy 100%, I think my body is about 35% Redbull and the rest is booze.

Keith and I greatly appreciate Jason taking the time and answering our questions about BlackLight(and their coffee drinking).  If you have not seen any footage of BlackLight: Tango Down, I have put together three of the game's promotional trailers:


Questions:
Had you heard of BlackLight: Tango Down before this?  What do you think of BlackLight from what you read in the interview and saw in the video compilation?
If you could ask Jason a question about BlackLight, what would it be?

I am excited for BlackLight, and I will be downloading the demo for it on my PS3 when it becomes available, and hopefully I'll get some game-play footage captured and put up quickly.
Posted by coffeewithgames at 3:33 AM