Thoughts:
Out of all the "new" Wii games Nintendo showed at E3 last week, I think that Kirby's Epic Yarn is the freshest approach on an existing Nintendo franchise.
Donkey Kong Country Returns looks like another Donkey Kong Country.
The Legend of Zelda: Skyward Sword looks like it will be another Zelda title.
If you did not see the E3 trailer for Kirby's Epic Yarn, the trailer above shows Kirby's progress from his NES days, to the N64, and now onto the Wii.

The Kirby games are like what I mentioned about the original Kid Icarus game, in that I have played some of them, but never finished one completely through.

Quick Brew Info:
We will be looking at the data for Kirby's Adventure and Kirby 64: The Crystal Shards. 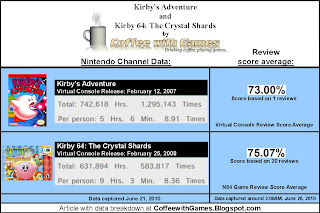 (click image to enlarge)
Virtual Console Release/Days Since Release:
Kirby's Adventure was re-released through the Wii's Virtual Console on February 12, 2007.  It is available for download for 500 Wii Points

.
The data pictured above was collected approximately 1,226 days since Kirby's Adventure re-released.

Kirby 64: The Crystal Shards was re-released through the Virtual Console on February 25, 2008.  It is available for download for 1000 Wii Points

.
The data pictured above for Kirby 64: The Crystal Shards was collected approximately 848 days since the game re-released.

has 143,358 players reporting their play-time data.
Kirby 64: The Crystal Shards

has 69,834 players reporting their play-time data.

As of 2:00AM on June 26, 2010, neither Kirby's Adventure nor Kirby 64: The Crystal Shards were in the "Popular Titles" list on the Virtual Console.

Interesting Fact:
The first game that Kirby appeared in was Kirby's Dream Land

on the Game Boy, releasing on August 1, 1992, in North America.  I thought this was interesting, as I always thought Kirby first appeared on the NES, then the Game Boy.

Questions:
Have you played any of the Kirby games?  I know there are a lot of Kirby games, and I remember playing Kirby's Adventure and Kirby's Dream Land.
Do you have a favorite Kirby game, and are you looking forward to Kirby's Epic Yarn releasing later this year?


You can pre-order Kirby's Epic Yarn on Amazon.com, and they have the release date for October 31, 2010.

Posted by coffeewithgames at 2:54 AM