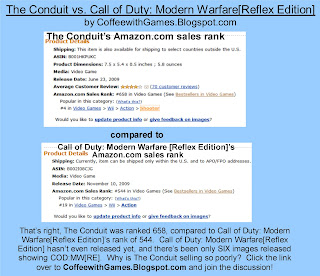 A picture says a thousand words?  Well, I think that picture above is baffling.  I'm baffled at how Call of Duty: Modern Warfare [Reflex] has a higher sales rank on Amazon.com, than The Conduit does.

Why do I find it baffling?

1)  Very little is known about how Call of Duty: Modern Warfare [Reflex] will play

2)  There have been ONLY six screenshots of Call of Duty: Modern Warfare [Reflex] released

How/why is it that Call of Duty: Modern Warfare: Reflex has a higher sales rank than The Conduit?

1)  Casual gamers are buying Call of Duty: Modern Warfare [Relfex], thinking it's going to be Modern Warfare 2 for the Wii, not knowing the difference

Also, I know The Conduit's online is a glitchfest, and because of that, sales have probably slowed as word-of-mouth spread about the problems with multi-player, but I definitely don't think enough information is known about Call of Duty: Modern Warfare [Reflex] to justify purchasing it now.

What do you think?  Have you reserved or already purchased Call of Duty: Modern Warfare [Reflex] for the Wii?

Do you plan on buying Call of Duty: Modern Warfare [Reflex]?

*Pictures were captured off Amazon.com around 3a.m. on Friday, October 30.

Posted by coffeewithgames at 4:01 PM 2 comments:

The Beach or The Gym?

The original Wii Sports and Wii Fit have done extremely well, both selling millions of copies.
Wii Sports was included with the Wii in North America and is a great piece of software to demonstrate the Wii's capabilities with motion controls, right out of the box.
Wii Fit was released in 2008 and was bundled with the Wii Balance Board, which was a new way to get gamers involved in games and also in shape.

Flash-forward to 2009!
In July, Nintendo released a sequel of sorts, to the original Wii Sports, Wii Sports Resort.  Wii Sports Resort was bundled with a new accessory, Wii Motion +, selling for $49.99.
Wii Sports Resort is Nintendo's software to demonstrate some of the possibilities that can be done in games on the Wii, now with the new Wii Motion + accessory.
In October, Nintendo released a sequel, to the original Wii Fit, Wii Fit Plus.  Wii Fit Plus is being sold as a software alone for $19.99, or with the Wii Balance Board for $99.99.

I think based off the Nintendo Channel data, it looks like more Wii owners would prefer going to a beach resort, than working out in a gym.

Have you bought Wii Sports Resort and/or Wii Fit Plus?  If so, which game have you spent more time with?

Posted by coffeewithgames at 11:46 PM 4 comments:

The Battle of the Rhythm Games: Nintendo Channel Data

Have you picked up either Guitar Hero 5 and/or The Beatles: Rock Band, if so, what do you think of the games?
Posted by coffeewithgames at 1:17 AM No comments:

Six weeks ago Nintendo released the Nintendo Channel update, and for 6 weeks, the game play data wasn't updated.  The great news is that the game play data has been updated and hopefully that will continue on a weekly basis.  Because there was a six week gap with no reporting, some assumptions will be taken.

The Casual/Core games that were being tracked are back and updated, but now also with Amazon.com's sales rank to go along with it: 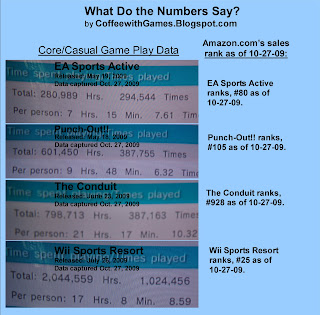 Compared to the hours from 6 weeks ago: 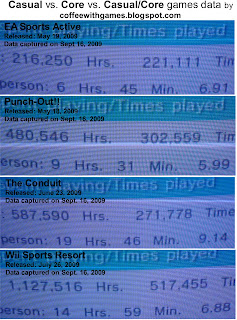 Things of interest:
The Conduit is still second in game play hours reported, but as shown on Amazon.com's sales rank, The Conduit is in last place in sales.
Wii Sports Resort crossed the 2 million hours played mark and is still selling extremely well on Amazon.com.
I think EA Sports Active is a great example of a game marketed almost entirely toward the new "casual" market on the Wii.  EA Sports Active has sold more than The Conduit and Punch-Out!!, from the numbers available, and the sales rank on Amazon.com reflects that, but still EA Sports Active has the fewest number of game play hours reported, I think reflecting the "casual" user base that is buying the game.

Are you still contributing any of the hours of game play associated with these games?
Posted by coffeewithgames at 1:06 AM No comments:

A video showing the history of most, if not all, Nintendo systems released
in North America.

Posted by coffeewithgames at 2:26 AM 2 comments:

I was just doing some research for an article I'm writing, and while doing the research, I went to Nintendo's website and looked at the history of the company.

I wonder if the person in charge of updating Nintendo's website, does it as a job or as a hobby.  If they do it as a job, they must be too busy rolling around in the piles of cash they've been making to actually update the site.

What am I talking about?  Well, if you visit the Company History page on Nintendo.com, you won't see a certain gaming system they released this year listed(released six months ago as of today, October 5).

Do you know what system is missing from the list?
Posted by coffeewithgames at 12:35 AM 2 comments:

Nintendo released their latest update, 4.2, for the Wii last week.  It was reported by, http://www.gamealmighty.com/nintendo-patches-the-conduits-spawn-glitch, that they had played a couple of matches online of The Conduit after updating to 4.2 and they didn't experience the spawn glitch.  They said at one point, "While we can't officially confirm Nintendo's patching of the spawn glitch, we can at least note that is has now failed to occur, even with its tell-tale signs, after 4.2's release."

Well, I would just like to update with video proof, that Nintendo's 4.2 patch did not fix The Conduit's spawn glitch as they had hoped, and even I had hoped after reading their article.

If you purchased The Conduit, does the spawn glitch make you less likely to attempt to play the multi player now?  For myself at this point, I'm hoping that Call of Duty: Modern Warfare[Reflex] has controls as great as The Conduit's and online play as smooth as Call of Duty: World at War's is on the Wii.

Posted by coffeewithgames at 3:52 AM No comments: