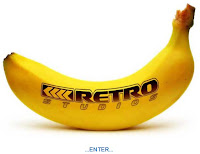 (Retro Studios' new entrance page)
Thoughts:(first this time)
When the original Donkey Kong Country was announced for the SNES, I remember being really excited for the game, and I even received the VHS tape Nintendo mailed out to help promote the game.


The game released in November of 1994, and it was on my Christmas list that year. I knew I was getting it, because I was at Toys R'Us when my mom purchased(I knew Santa wasn't real!).
Instead of waiting patiently for Christmas day, I was super excited about the game and ran around the house acting ape like, begging my parents to let me open it early.


There was some stipulation to opening it early, but the running around like an ape helped; and I was able to open it early.


Last week at E3, Nintendo announced that Retro Studios was working on Donkey Kong Country Returns.  I was glad to see it, and after watching the trailer(multiple times) it looks like the game is coming along nicely; and should be a great return for the Donkey Kong Country series.

Now, let us look at some data! 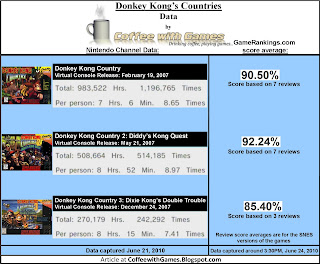 Sales Info:
I checked the Virtual Console's "Popular Titles" section, at 11:55PM on 6-24-10.
The original Donkey Kong Country was the only game I saw listed, and it was at the #7 spot.
The "Popular Titles" section shows the "Top 20" Virtual Console titles that Wii owners are downloading, I believe for that day.
I also find it interesting that from the data collected, as of June 21, Nintendo has made approximately $1,826,984 off of the three Donkey Kong Country games on the Virtual Console.

Donkey Kong Country 2 was released again through Nintendo's Virtual Console service on May 21, 2007.
The data totals above are reported for 1128 days; or 3 years, 1 month, 1 day including June 21.

Do you think the review score averages for the games are correct, with Donkey Kong Country 2 being slightly better than the original?
I would have to play them again before deciding, as it has been YEARS since I have played/completed Donkey Kong Country.

Last, but definitely not least, are you excited about Donkey Kong Country Returns?
Is it a "day one" purchase now, or are you taking a "wait and see approach" as I am?

Posted by coffeewithgames at 12:12 AM