Which console to buy?! Wii U, PlayStation 4, or Xbox One? 2013 Holiday Console Buying Guide

Every "next generation" home console system is now out in the U.S., though the newest two (PlayStation 4 and Xbox One) might be kind of hard to find right now. While the Wii U released last year and I bought it day one, I have not purchased either the PlayStation 4 or the Xbox One. Why?

Well, in short, because I'm pretty cheap. I have never purchased more than one console each generation, when they first release. I have always started with buying the lowest priced console in any new or "next" generation, and then usually pick up additional systems as their prices drop.

If you own a Wii, PlayStation 3, or Xbox 360 and are debating on buying a Wii U, PlayStation 4, or Xbox One this holiday season, which one would I recommend? Brew yourself some coffee, and take a look below at CoffeeWithGames' 2013 Holiday Console Buying Guide!

Where to buy the PS4 now? Amazon.com 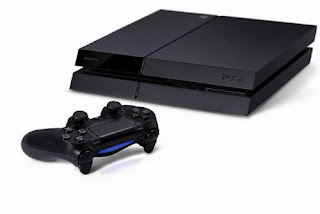 Coffee Beans
If you are looking at grabbing a PlayStation 4, but didn't pre-order one, you can grab one right now (at the time of this posting anyway!). If you hop over to its Amazon.com page, HERE, you can currently grab the PlayStation 4: Launch Edition for its MSRP of only $399.99.

I'm not sure how long it will be available on Amazon.com and if it will sell out, but you can purchase it now and not have to worry with hunting one down later if you're planning on getting one before/for Christmas.

While I have a friend currently waiting to get a PS4 in line right now (Central Time Zone), I'm not planning on getting a PS4 this holiday season. The picture below is of the PS4 games my friend's wife got him as a surprise to go along with his PlayStation 4 he is about to pickup! 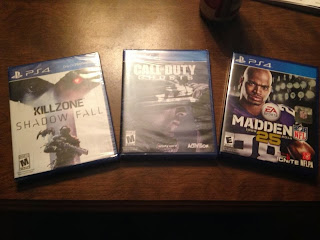 I'll probably wait a few months and see what the reception is before making a decision to grab one (and maybe hope for a price drop!). But I do think it's awesome to see an online retailer like Amazon.com with some PlayStation 4s in stock for launch day.

Questions
Are any of you picking up a PlayStation 4 today, or this holiday season? If so, what games are you getting with it?

Here are some more links directly to the PlayStation 4 bundles being sold on Amazon.com:


Posted by coffeewithgames at 12:32 AM No comments:

To quit, or not to quit? Black Ops II online match - played via Wii U GamePad Off-TV Play

So, in a recent online match when my Kill/Death ratio was 1/11 at one point. Did I choose to quit, or not to quit? The video below is of that recent Black Ops II match I played on the Wii U, and despite getting off to a HORRIBLE start for my team (as you will see), I stuck with it and turned things around a bit:

If you're wondering about the title of the video, and this post, I played the match using the Wii U's GamePad Off-TV Play. And it's how I have spent the majority of my time playing Call of Duty: Black Ops II.

Questions
If you play online multiplayer games, like Black Ops II, do you find yourself sticking matches out (like Nick said he does as well earlier this year)? Or do you quit matches if it seems there is no hope?

Also as a side question, if you have picked up Call of Duty: Ghosts on the Wii U and were playing Black Ops II first, what do you think of Ghosts? Good? Bad? Better?

I get emails and questions about what I use to record and upload my videos, and you can see both the capture device and software I used for this video below:

Posted by coffeewithgames at 1:05 PM 9 comments:


Coffee Beans
Saying October was a busy month for us, would be an understatement and I could probably be put on trial and convicted of perjury if I was to testify under oath that October was only "busy". While I aged another year in October and the beginning of the month was busy as usual, the second half of the month is when we were out of the house and the busiest. We were out of the house for more than half of October, visiting our families in another state.

I do 99% of my web related work from my desktop PC. So, while I thought I might get a few posts done using Mrs. Coffee's laptop while we were out of town, that just didn't happen. I did bring our Wii U with us though, and it was played a good amount on the first part of our trip.

What coffees did I consume and games did I play in October? Brew yourself some coffee, and let's take a look!

Coffees Consumed
Traveling out of town for much of October resulted in many more coffees being brewed up and consumed by me, than in a normal month. In October, I consumed Beaumont Coffee Classic Roast, Beaumont Pumpkin Spice Coffee, K-Cup Breakfast Blend, K-Cup Italian Roast, K-Cup Black Silk, and Community Coffee Medium Roast. I also had one or two cups of McDonald's Premium Roast Coffee, as well as some random gas stations' coffees in October during our long road trip.

We don't have a Keurig Coffee machine, but my mom does. She has a wide assortment of the K-Cups, and I probably consumed more than the K-Cup blends I have listed above, but those are the ones I remember for sure. The K-Cup Breakfast Blend is nice medium blend coffee, while both the K-Cup Black Silk and the K-Cup Italian Roast coffees are more like a dark roast. The Italian Roast was the strongest, I would say it is close to tasting like a regular Starbucks house blend from stores, but not quite that strong (or, burnt I would say). Mrs. Coffee and I both consumed A LOT of the K-Cups while we were visiting my family on the first part of our trip, and it reconfirmed my thoughts of why I can't have a Keurig Coffee machine in our house. We would be bankrupt!

The Community Coffee Medium Roast was the coffee with consumed morning, noon, and night on the second leg of our trip. We have brewed up some Community coffees in the past, and it is a much milder medium roast coffee.

Super Metroid - Bean 1 enjoys watching me play this one, and earlier in the month he requested I play, "Super Metro!" He now says the name properly, but I did laugh to myself at him calling it Super Metro the first few times he did it. I am completely stuck in this one though! I am not sure if I have hit a glitch, but I can't figure out how to progress in the game anymore. As mentioned above, we took our Wii U with us when we went out of town and a friend of mine started playing my file. Even he couldn't figure out how to progress in the level anymore! Perhaps once I look up how to continue my game, I will play it some more.

Batman: Arkham City: Armored Edition - I borrowed this game from my neighbor in early October, and played it some before we left. I have enjoyed my time with the game, though I did get stuck on one part that took me a while to figure out what I was doing. While I haven't beat the game or gotten super far into it yet, I do think the use of the Wii U GamePad is very well done. The game makes great use of the GamePad in regular play (playing with the TV as the main screen), such as using the GamePad's screen as the city's map while traveling about, and using the GamePad's touch-screen for scanning segments, where you move your finger on/around the screen looking for radio signals. And the can be played completely on just the Wii U GamePad, via the Off-TV Play feature.

Full Bore - I found out about this game, after following one its developers on Twitter and being offered a copy of it. I let them know before I received it from them, that I don't do reviews or game coverage in typical fashions around here. But I said I would give the game a try and provide some feedback. I haven't played it very much due to getting it right before leaving town, but what do I think of it so far? If Samus was ever bored and looking for something to play, I think this would be a game she would play. You play as a boar, and the gameplay mechanics keep with that aspect pretty well. It is a 2D puzzle adventure game, and you can dig, push, and climb/hop your way through the world as you explore. There are items spread around different parts of the map that you can collect if you seek them out (not quite sure what they do just yet), and many require some puzzle solving to reach. From my very short time with the game though, it seems like there is a lot to do and many areas to explore. The game's 2D pixel art reminds me a lot of Mutant Mudds' retro style, and I like what I have seen so far. I'm hoping to get through the rest of the game this month, and do a more detailed piece on it. If you want to know more about the game, check out the trailer below and visit its webpage HERE:


LEGO City: Undercover - I mentioned in last month's "September Brewed" post that I had "encountered a serious issue with the game". I had to send the game off for repair, and I did get it back before we left town. And I'm glad I did! As I mentioned above, I brought our Wii U with us and LEGO City: Undercover was the biggest hit with the younger kids. They enjoyed just roaming around the city, driving vehicles, and riding on the trains. New Super Mario Bros. U (NSMBU) was played a little bit by them because they could still play it while the TV was being used for something else, but not nearly as much as they played LEGO City: Undercover.

Call of Duty: Black Ops II - The first weekend we arrived at our first destination of the trip, my best friend growing up came to town to visit. Late one night while our wives and my mom were talking, we fired up Black Ops II on the Wii U. It was his first time really seeing the Wii U's GamePad features in action, other than briefly playing NSMBU and Super Metroid earlier, and we played multiple online matches. He played on the TV using one of the Wii U Pro Controllers I had just picked up, and I played using the GamePad with Off-TV Play. It was the first time I had really put Black Ops II's splitscreen mutliplayer option to the test. And I was super impressed with how well it worked, throughout all of our matches. Dear Nintendo of America, Please start advertising these type of features and games on the Wii U...

Caffeinated Thoughts
I did purchase one new Wii U game in October, Tekken Tag Tournament 2. Amazon put the game on sale for just $9.99, and being an Amazon Prime member, I got free shipping on it!

I still haven't opened it up yet, but have a solution for my lack of gaming woes that I'll be implementing here shortly.

Being that October was the first month with some cooler weather (for many of us in the U.S. anyway), did any of you perhaps try some new coffee blends or drink more coffee because of the cooler weather?

Posted by coffeewithgames at 4:30 PM 12 comments: