's Amazon.com sale rank is #320 and the current selling price is $49.95.
This is the first week I can recall the game's price not being at least 46.99, and Amazon.com raising the price to $49.95.
GameRankings.com Review Score Averages:
Monster Hunter 3's review score average is now 85.00%, based on 46 reviews.
Monster Hunter 3 gained one review in its average since 2 weeks ago, lowering its average from 85.33%. 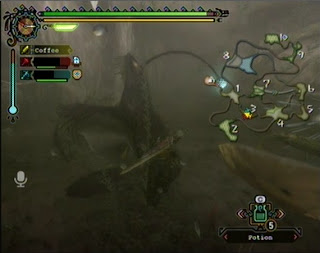 (It will suck your life and your time away!)
Thoughts:
The average number of hours per person being reported already, I still find crazy.

.
The only Wii games currently ahead of Monster Hunter 3 as of average hours played "per person", are: Super Smash Bros. Brawl, Animal Crossing: City Folk, Guitar Hero III: Legends of Rock, and Harvest Moon: Animal Parade.
Questions:
Are you still playing Monster Hunter 3?  If so, and I have not hunted with you online, what times do you normally play?
Also, what are your total game-play hours for Monster Hunter Tri?
Currently, mine are 55 Hours 30 Minutes.
If you have not purchased Monster Hunter 3, you can see new and used prices for the game on Amazon.com below.  Join the hunts!
Posted by coffeewithgames at 3:41 AM