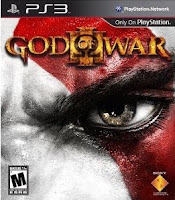 Quick Brew Info:
God of War III was released for the PS3

in North America, on March 16.  God of War III was developed by Sony Santa Monica, and published by Sony Computer Entertainment.

(click chart to enlarge)
Chart Info:
The chart above shows the sales ranks for the standard version of God of War III

(Too high?  Too low?  Just right?)
God of War III was released with a MSRP of $59.99.
As early as April, articles started popping up around the internet talking about different stores having price drops on God of War III.
On April 15, PunchJump.com reported Amazon.com discounted God of War III to $49.54.
Around May 12, Original-Gamer.com reported GameStop.com had discounted God of War III's price to $34.99, as a partial day sale only.
As the chart shows, it was on May 19 Original-Gamer.com reported, Amazon.com discounted God of War III"s price down to $44.99.
Thoughts:
While I do own a PS2 and a PS3, I have never played a God of War game from beginning to end.
I watched a friend play through almost the entire first God of War, on the PS2.  I have watched trailers for God of War III and watched some of the developer videos on the making of it.
God of War III is probably Sony's biggest game for the PS3 this year, other than perhaps Gran Turismo 5?
The thing that is surprising to me, is how quickly the price has dropped on God of War.
It has not even been out a full 3 months, and it has been having significant price-cuts.
God of War III is currently discounted 37% from its MSRP on Amazon.com, selling for $37.73.
Questions:
Have you played and beaten God of War III?
If so, do you think the game is worth the MSRP of $59.99, or is the game's length a little too short for that asking price?  If you think $59.99 is too much for the game, what do you think is the right price for it?
Being that God of War III pretty much remained Amazon.com's "Top 20" for May, we will see in about a week's time, how Amazon.com's data compares to the NPD's when it is released.
If you are interested in God of War III, you can see new and used prices for it on Amazon.com below:
Posted by coffeewithgames at 1:54 PM