Coffee Beans:
While GoldenEye 007 on the Wii is a very solid FPS game, I think one area that was overlooked by Eurocom was the default control setting.  A default control setting should work well without players having to go into control options to adjust anything unless they want to adjust something, but I found GoldenEye 007's default Wii Remote and Nunchuk control setting to have an issue that needed to be fixed.
When I noticed the control issue, it was very apparent, and that this issue somehow slipped by the play-testers is baffling to me, unless perhaps Eurocom didn't play-test the Wii Remote and Nunchuk controls, and other control settings, past the first level in the game(or perhaps I'm the only one to experience this?).

What was the control issue I had with GoldenEye 007's default control setting?  Watch the video below to see the issue, and how I resolved it:

Also, to see GoldenEye's default controls, and my current customized control settings, take the jump past the break below to view an image of them both!

Sonic the Hedgehog's Birthday - How Many Hours Played

Coffee Beans:
Sonic the Hedgehog was originally released on the Sega Genesis on June 23, 1991.  The game has seen several re-released versions, and one of those versions was for the Nintendo Wii's Virtual Console.
Sonic the Hedgehog was re-released for the Virtual Console service on November 19, 2006 at a price point of just 800 Wii Points, which is $8.
The game received an ESRB rating of "Everyone" with no content descriptors listed for parents/gamers to be aware of.

With Sonic having just had his 20th birthday this last week, how many hours Wii owners have reported playing Sonic the Hedgehog with over 4 years of game-play reported?  Let's take a look!

Read More HERE >>
Posted by coffeewithgames at 1:04 AM 10 comments:

Coffee Beans:
Many of you may have seen some of my coverage for Greg Hastings Paintball 2 (GHP2) on the Wii over the last several months.  Well last week on June 14, Greg Hastings Paintball 2 released on the PlayStation Network and is available for $19.99.
The game was developed by Super X Studios, and published by Majesco Entertainment.  GHP2 received an "Everyone 10+" rating from the ESRB, with "Language, Violence" listed as content for gamers/parents to be aware of.

For those of you that haven't seen any footage of Greg Hastings Paintball 2, the video below contains one round of a "RaceTo" match that a friend and I played together cooperatively through the PlayStation Network.  While we played some matches against each other, the video below is of us being on the same team battling against a team of AI opponents.

Coffee Beans:
LEGO Pirates of the Caribbean was released on May 10, 2011 for the Wii, as well as every other current console/handheld video game device.

LEGO Pirates of the Caribbean was developed by Traveller's Tales, and published by Disney Interactive Studios.  The Wii version, along with the PS3 and Xbox 360 versions, has a MSRP of $49.99, and the game received an ESRB rating of "Everyone 10+" with "Cartoon Violence, Comic Mischief" listed as content for gamers/parents to be aware of.

How many hours have Wii owners reported pirating with Captain Jack Sparrow in the Caribbean, since the game released?  Let's take a look!

Read More HERE >>
Posted by coffeewithgames at 3:06 AM 4 comments:

The Legend of Zelda: Ocarina of Time's Reported Game-Play Hours

Coffee Beans
The Legend of Zelda: Ocarina of Time (TLoZ:OoT) was originally released on the Nintendo 64 system in North America on November 23, 1998.

The game was developed by Nintendo's EAD, and of course directly published by Nintendo.  The game had a MSRP of $49.99 when it released on the Nintendo 64, but has since been "re-released" multiple times.

How many hours have Wii owners reported playing The Legend of Zelda: Ocarina of Time on the Virtual Console, since the game released?  Let's take a look!

Read More HERE >>
Posted by coffeewithgames at 2:43 AM 11 comments:

The Most Sold Game Ever - Wii Play's Hours Reported Played

Coffee Beans:
Wii Play was released on February 12, 2007 with a MSRP of $49.99.  The "game" was a compilation of nine mini-games, that used player created Miis from the Mii Channel; but not only did gamers get the nine mini-games for $49.99, they also received a Wii Remote with the package.
Wii Play received an ESRB rating of "Everyone" with "Mild Cartoon Violence" listed as content for gamers/parents to be aware of.

How many hours have Wii owners reported playing the most sold video game of all time, with 1,583 days reported?  Let's take a look!

Read More HERE >>
Posted by coffeewithgames at 2:28 AM 10 comments:

Michael Pachter On Wii Play Motion, A Year Ago

Coffee Beans:
If you just started following my blog in the last year, you may not have seen two posts last year that I did on Michael Pachter.  One post was titled, "Analyzing the Analyst: Michael Pachter is Wrong", and the second post was titled, "Michael Pachter Responds!  Thoughts on the Wii Vitality Sensor", which showed part of a response Mr. Pachter sent me in regards to the first post.
Today I'm showing some more excerpts from the email exchanges, that will look at part of our conversation regarding Nintendo's supply issues they were having last year with the Wii Fit Plus with Balance Board bundle, and also the supply issues with Wii Play.
One reason for releasing these exchanges now, is that Wii Play Motion was just released this week, and I actually mentioned(predicted) it last year(with just a slightly different name, but VERY close to what it ended up as).

So, the text below is from a portion of Mr. Pachter's first email he sent to me, followed by part of my response to him, and his reply again.  To understand his initial response below, you may want to start at the POST that started the exchange, HERE.

Did Michael Pachter think Nintendo would release Wii Play Motion over a year ago, and what were his reasons?  Let's take a look!

Read More HERE >>
Posted by coffeewithgames at 2:20 AM 8 comments:

Read More HERE >>
Posted by coffeewithgames at 3:18 AM 6 comments:

If you were watching Sony's E3 press conference tonight, you may have been really surprised(as I was), about the price points for the PlayStation Vita(Click to pre-order now!

Read More HERE >>
Posted by coffeewithgames at 1:30 AM 15 comments: 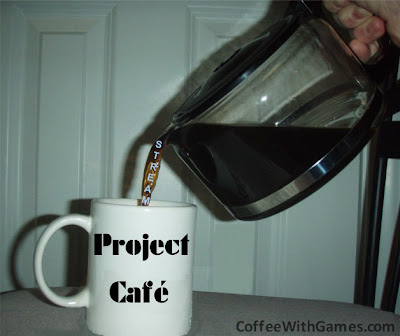 Coffee Beans:
May was an interesting month for me.  Being that I had finished up school(and am out for the summer), I started looking for summer work.  I was hoping that whatever job I got might turn into a good part-time job when school starts back, but wasn't sure how quickly something would happen in this job market.  I ended up landing a job at Chick-Fil-A, and have been gainfully employed for about the last 3 weeks.  My first day of training I tried the coffee, and I also had it my second day, though I forgot to add it to my "Coffees Consumed" for May.
So, with a new job and my same spastic nightly schedule, what coffees did I consume and games did I play during May?  Let's take a look!

Read More HERE >>
Posted by coffeewithgames at 2:14 AM 11 comments:

WiiWare Wednesday: Has the Castle Been Defended?

Coffee Beans:
Nintendo's WiiWare service started in North America on May 12, 2008.  There were six WiiWare titles available for download on the WiiWare service's launch, and now there are more than 300 WiiWare games to choose from.
New WiiWare games are usually added to the Wii's Shop Channel each week, and games range in price from just $5, up to $15.  Some of the WiiWare launch titles were original titles not found on other platforms, but one game had been released half a decade earlier for the PC, and that WiiWare game was Defend Your Castle(DYC).

Defend Your Castle was released on May 12, 2008 for the WiiWare service, and costs 500 Wii Points, which is $5.  The game was developed and published by XGen Studios, and received an "Everyone" rating from the ESRB with "Cartoon Violence" listed as the only content for gamers/parents to be aware of.

How many hours have Wii owners spent defending their castles, with 1,114 days of game-play reported?  Let's take a look!