Quick Brew Info:
The World Cup is going on right now, and with only eight teams remaining, I really have no idea who the favorites are moving forward.  I have never really followed professional soccer, even though I did play little league soccer for a few years growing up.

In this post, we will look at four soccer(or football in Europe) games on the Wii that all have game-play data reporting.
We are looking at Mario Strikers Charged, FIFA Soccer 09 All-Play, Pro Evolution Soccer 2009, and FIFA Soccer 10. 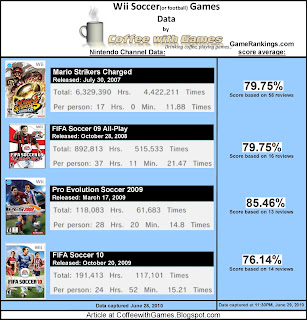 I know that Pro Evolution Soccer 2009 already has a sequel(2010), and that EA released 2010 FIFA World Cup; but at the time of this posting, the four games shown are the ones with data reporting.

If you were not following/reading my blog back in January, you may have missed my post about several canceled Wii games.  Mario Strikers Charged was one of the games that was mentioned as not being produced or shipped any long by Nintendo of America.  I don't think that status has changed, as the game is currently only available on Amazon.com from third party vendors.
If you missed the blog post about the canceled Wii games, the direct link for the post is: http://coffeewithgames.blogspot.com/2010/01/nintendo-stops-shipping-and-producing.html#comments.


If you are interested in any soccer game for the Wii, I am providing links to the newest versions of these games(where available); as they should be available directly from Amazon.com, and not third party vendors:

Posted by coffeewithgames at 1:48 AM