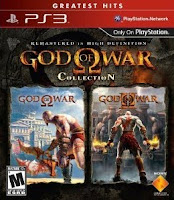 (Click chart to enlarge)
Chart Info:
The chart above shows the sales ranks for God of War: Collection, with data captured between April 25 and May 31.
The lowest sales rank I recorded for God of War: Collection was #88 on May 18, around 11:40PM.
I found it interesting, that May 18 was a Tuesday.
There were five PS3 titles released on May 18, that probably affected its sales rank.  Some of the titles released on May 18 were; Prince of Persia: The Forgotten Sands

Thoughts:
As I stated in my "God of War III's May Sales Ranks" post, back on June 9, I have never played a God of War game from beginning to end.
I know this was Sony's first "remastered" game from the PS2 to port to the PS3, but with the sales God of War: Collection has seen I wouldn't doubt if Sony is porting more PS2 games to the PS3, with "remastered" graphics, and now perhaps even new game-play controls with the new Sony Move controller.

As for the sales ranks, I think it will be interesting to see if God of War: Collection makes the NPD's "Top 20" in software sales for May, when the numbers are released in July; compared to how it was ranking on Amazon.com throughout May.

Questions:
Have you played both the PS2 and PS3 versions of God of War and God of War II?
If so, do you prefer one version more than the other?


Also, if Sony is porting anymore PS2 games to the PS3, what games would you like to see "remastered" and brought to the PS3 like God of War: Collection?


If you are interested in God of War: Collection for the PS3, you can see new and used prices for it on Amazon.com below:

Posted by coffeewithgames at 10:13 PM