Coffee Beans
Metroid Prime: Trilogy was released on August 24, 2009 in the U.S. with a MSRP of $49.99. The game was developed by Retro Studios and published by Nintendo, and received an ESRB rating of "Teen" with "Animated Blood, Violence" listed as content for gamers and parents to be aware of. I reported on January 8, 2010, less than 5 months after the game was released, that Nintendo confirmed they were not shipping more copies of Metroid Prime: Trilogy.

How many hours have U.S. Wii players reported playing Metroid Prime: Trilogy since the game released just over 3 years ago? Brew yourself some coffee, and let's take a look! 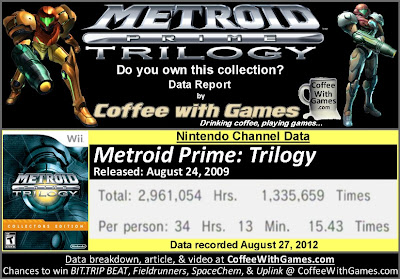 Trilogy's play-time per day/session is now 2 hours 13 minutes, and the game's overall reported average is one hour more than last year, sitting at 34 Hours 13 Minutes as the image shows.

Caffeinated Thoughts
I have mentioned before on the site that I purchased my copy of Metroid Prime: Trilogy from Best Buy for just $19.99. I knew the game was a "best buy" at that price, and didn't pass it up. Looking at the "used" and "new" prices for the game now, I am very glad that I didn't wait to purchase it, though I have yet to play any of the games on the disc. If you have not seen footage of the Metroid Prime games, and what to expect from them, the trailer below should give you a good idea:


As for the reported data, the overall reported "Total" hours and the average hours "Per person" have increased less than I expected them to over the last year. I thought that perhaps players would completed two of the Metroid Prime games on the disc by now, and that the average would be sitting closer to 40 hours "Per person". I assume that completing two of the Metroid Prime games should take about 40 hours "Total", 20 hours for each.

If you are looking for information on how to enter the games contest/giveaway, you can find that post HERE. If you are already entered in the contest/giveaway, you can get an extra entry by tweeting out this post using the "Tweet" button below and adding @CoffeeWithGames to the tweet; you can also get an extra entry by liking this post on the CoffeeWithGames Facebook page HERE.