Coffee Beans
FINAL FANTASY FABLES: Chocobo's Dungeon was released for the Wii on July 8, 2008 with a MSRP of $39.99. The game was developed by h.a.n.d. and published by Square Enix, and it received an ESRB rating of "Everyone 10+" with "Fantasy Violence, Mild Suggestive Themes" listed as content for gamers and parents to be aware of.

How many hours have U.S. Wii owners spent retrieving memories in Chocobo's Dungeon? Brew yourself some coffee, and let's take a look! 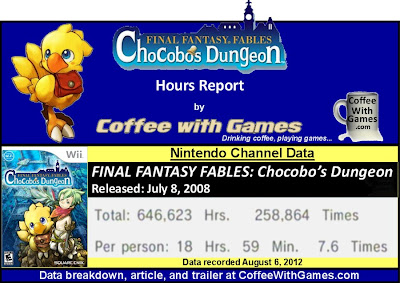 The Brew
Final Fantasy Fables: Chocobo's Dungeon has approximately 34,061 U.S. Wii owners that have reported game-play data through the Nintendo Channel, with 1,490 days possibly reported. The game has an average play-time per day/session of 2 Hours 29 Minutes, with its overall reported average being 18 Hours 59 Minutes "Per person" as the image above shows.

What about coffee, or chocobos though? Well, after watching the trailer above I could perhaps rename the site CoffeeWithChocobos, if you noticed the clip starting about the :35 mark? If you have played the game and are a fan of it, can you confirm that the chocobo in the video was drinking coffee? Being that I haven't played Chocobo's Dungeon, I would choose coffee if I had to choose between the two.
While the game doesn't have as many hours as I was expecting for a Final Fantasy game (more than a million), the average hours reported "Per person" I think are decent enough, though it's probably a lot more difficult to find the game "new" in stores if you're looking for it.

Questions
If you have played Chocobo's Dungeon, is it a game you would recommend to other Wii owners? Being that the game has online capabilities, is that feature something that Wii owners who are interested in the game should be concerned with not being able to play (or use), if they are just now getting the game?
Also, if you are a fan of the Final Fantasy series in general, which game from the series would you recommend to new players to start off with?

You can see a few Final Fantasy related items below, as well as the game:

Posted by coffeewithgames at 11:42 PM