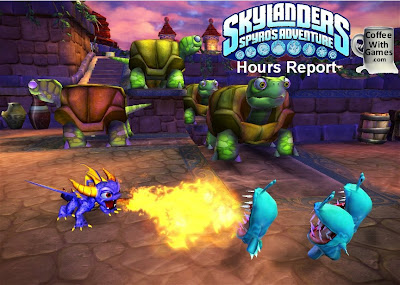 Skylanders Spyro's Adventure was released on October 16, 2011 with a "Starter Pack" MSRP of $69.99. The game was developed by Toys For Bob and published by Activision, and it received an ESRB rating of "Everyone 10+" with "Cartoon Violence" listed as content for gamers and parents to be aware of.

How many hours have U.S. Wii owners reported playing Skylanders Spyro's Adventure since its "Hours Debut" last year, and what is the average time played for the game? If you're a 3DS, PC, PlayStation 3, or Xbox 360 owner interested in the game, how many hours can you expect from it according to the reported data of the Wii version? Brew yourself a fresh pot of coffee, and let's take a look!

Caffeinated Thoughts
While I still have not played Skylanders Spyro's Adventure, knowing that Skylanders Giants is due out later this year I would probably wait for the new game if I were to get one. If you have not seen any footage on Skylanders and have no clue what the game is about though, the trailer below might give you a decent idea:


When I did the initial data report on Skylanders Spyro's Adventure, in the "Caffeinated Thoughts" section for it I said, "Seeing Skylanders Spyro's Adventure's average hours 'Per person' being more than 20 hours on its debut is extremely impressive, and shows the audience playing this 'game' seems to be really enjoying it...", and with the game having nearly doubled its reported average over the last 8 months I would say players have really been enjoying the game.

If you're a 3DS, PC, PS3, Wii, or Xbox 360 gamer interested in the title, based on the Wii's reported average of "37 Hrs" now and the original data report average of 20 hours, I think you should be able to get a good 20 hours just off of the "Starter Pack".

Skylanders Spyro's Adventure has been a big success for Activision, and I think its portal functionality with the toys might be one reason (a big reason) Nintendo added the Near Field Communication (NFC) functionality to the Wii U's GamePad controller, and I think it will be interesting to see how well Skylanders Giants is received when it releases.

Also, are any of you surprised that Skylanders' average hours "Per person" have passed two of Nintendo's top rated Mario Wii games?

If you are interested in the game, you can see a few of the versions below:

Posted by coffeewithgames at 2:42 PM