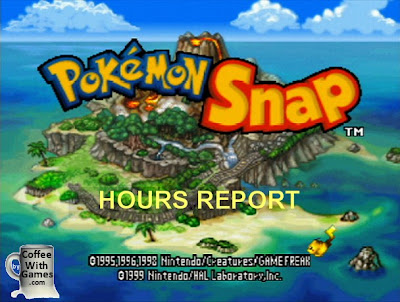 Coffee Beans
Pokémon Snap was originally released for the Nintendo 64 in North America on June 30, 1999. Pokémon Snap was re-released digitally for the Wii's Virtual Console at a price point of 1,000 Wii Points, which is $10.

The game was originally co-developed by HAL Laboratory and Pax Softnica, and published by Nintendo. The game has an ESRB rating of "Everyone" with no content listed for gamers and parents to be aware of.

How many hours have U.S. Wii owners reported snapping photographs of Pokémon on Pokémon Island? Brew yourself a cup of coffee, and let's take a look! 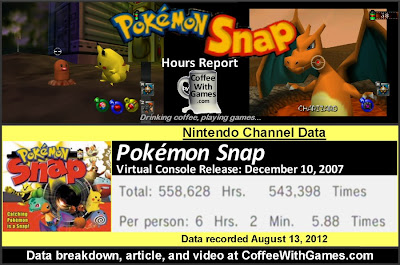 The Brew
Pokémon Snap has approximately 92,414 U.S. Wii owners that have reported game-play data through the Nintendo Channel, with 1,708 days reported. The game has an average play-time per day/session of about 1 Hour 1 Minute, and its overall average is 6 Hours 2 Minutes "Per person" as the image above shows.

Pokémon Snap's digital release on the Wii has made Nintendo about $924,140, just based on its approximate number of players that have reported data and its $10 price point.

Caffeinated Thoughts
I can remember when Pokémon Snap released for the Nintendo 64. I have mentioned before that I have never really played any Pokémon game, and I believe Pokémon Snap is the only game from the series I have "played", and it was only very briefly of a demo for it in a store.

If you have no clue what Pokémon Snap is about the video below might give you a better idea:

I think it will be interesting to see if a "Pokémon Snap Wii U" version will be released for Nintendo's new system, as I can imagine taking photos of Pokémon with the new Wii U GamePad could be setup really well, and have some interesting gameplay mechanics overall.

As I wrote about last year, Pokémon Battle Revolution was the Wii's first game to feature an online multiplayer mode, which makes me wonder if Nintendo has any special online features planned for their next Pokémon home-console game? Or, perhaps making use of the Wii U GamePad's NFC functionality and introducing a new Pokémon toy series to go along with the game, much like the Skylanders games (I think Pokémon fans might like this, just based on comments I have seen around)?

Questions
Did any of you play Pokémon Snap when it originally released for the Nintendo 64, or perhaps the Virtual Console release? If so, is it a Pokémon game you would suggest to fans of the Pokémon series that haven't played it yet?

If you are a Pokémon fan, is there a certain Pokémon game you would suggest as a good game to start with, for people new to the series? Also, do any of you expect a Wii U version/sequel of Pokémon Snap or a game very similar to it for the series on the new console?

You can see a few Pokémon items below:

Posted by coffeewithgames at 2:44 PM