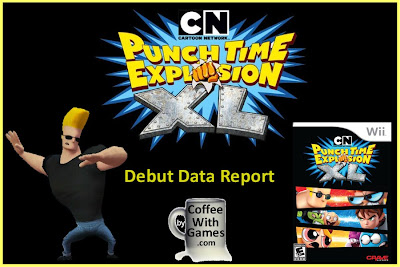 Coffee Beans
Cartoon Network: Punch Time Explosion XL was released for the Wii on November 8, 2011, I believe with a MSRP of $29.99. It was also released for the PlayStation 3 and Xbox 360 the same day, both with a MSRP of $39.99. The game was developed by Papaya Studio and published by Crave Entertainment for its U.S. release, and it received an ESRB rating of "Everyone 10+" with "Animated Blood, Cartoon Violence, Crude Humor, Tobacco Reference" listed as content for gamers and parents to be aware of.

How many hours have U.S. Wii owners averaged brawling with cartoon characters in Cartoon Network: Punch Time Explosion XL since the game released? Brew yourself some coffee, and let's take a look! 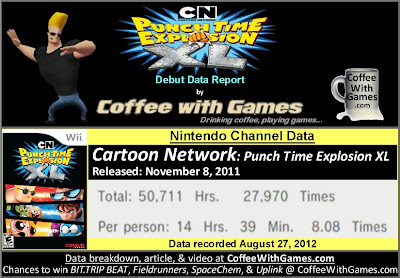 The Brew
Cartoon Network: Punch Time Explosion XL has approximately 3,461 U.S. Wii owners that have reported game-play data through the Nintendo Channel, with 293 days possibly reported. The game has an average play-time per day/session of about 1 Hour 48 Minutes, with its overall reported average being 14 Hours 39 Minutes "Per person" as seen in the image above.

Caffeinated Thoughts
I have not played Cartoon Network: Punch Time Explosion XL, but I did watch a "Development Diary" for it back in November. The game appears to have similar game-play elements as the Super Smash Bros. games, and even the upcoming PlayStation All-Stars Battle Royale. Instead of video game characters though, it's with popular cartoon characters off the Cartoon Network. Watch the "Development Diary" below to get an idea of what you can expect from the game:

"Did you ever wonder what would happen if Humungousaur and Samurai Jack met up in a dark alley? What if Dexter took on Mac and Bloo? The possibities are endless! If there was a way to get all your favorite cartoon characters together... Well you don't have to wait any longer... Get ready for Punch Time Explosion!", reads part of the description for the game. If you are a fan of the Cartoon Network characters, seeing the game with an average time of around 15 hours "Per person" I think is pretty good and it might a game you want to add to any "wishlist" you may have.

As for the chance to win the games, you can find more information HERE. If you have already entered the contest/giveaway, get an extra entry by tweeting out this post using the "Tweet" button below and adding @CoffeeWithGames to the tweet.

Questions
Have any of you played Cartoon Network: Punch Time Explosion XL on the PlayStation 3, Wii, or Xbox 360, or even the original Nintendo 3DS version of the game? If so, what did you think about the game and is it one you would recommend to fans of the cartoon characters and shows from Cartoon Network.

If you are interested in the game, you can see the home console versions below:

Posted by coffeewithgames at 11:57 PM