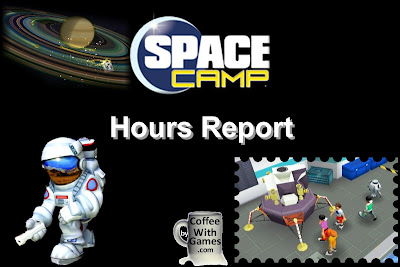 Coffee Beans
Sunday night as I was working on the computer, I was debating on whether or not to open an extra tab to NASA's site for coverage on their latest rover mission to Mars. I ended up opening an extra tab and switching back and forth on the coverage of the Curiosity's landing on the Red Planet. After watching the Curiosity coverage, it made me wonder how many "space" type games there might be on the Wii that I had missed. So, that's how this post was inspired.

Space Camp was released for the Wii on May 26, 2009 and I believe it released with a MSRP of just $29.99. The game was developed by 7 Studios (now closed) and published by Activision, and it received an ESRB rating of "Everyone" with "Mild Fantasy Violence" listed as content for gamers and parents to be aware of.

The Curiosity Mars rover took 253 days (about 6,072 hours) to reach Mars. How many hours have U.S. Wii owners reported training for lunar journeys with Space Camp? Brew yourself some coffee, and let's take a look! 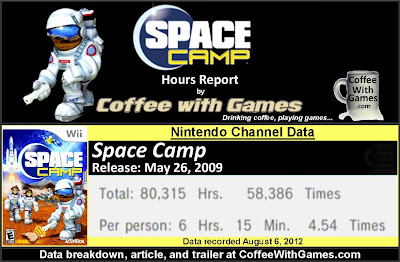 The Brew
Space Camp has approximately 12,860 Wii owners that have reported game-play data through the Nintendo Channel, with 1,168 days possibly reported. The game's average play-time per day/session is 1 Hour 22 Minutes, and as the image above shows the game has averaged just over 6 Hours "Per person" that has reported data.

Caffeinated Thoughts
If you had recently written an article with a title like, "Top Ten Wii Games You May Not Have Heard About", and you had included Space Camp in that list, I would have been surprised by it. When I was searching for games Sunday night and Monday afternoon, Space Camp was the only one I saw in my search that I had never heard of before.
If you have never seen any footage of Space Camp, below is a trailer for the game:


With the game only having one "professional" critic review for its GameRankings.com review score average, I can see how the game released and flew past my games radar unnoticed; there just wasn't a lot of coverage for the game from what I can tell.
While I don't recall ever seeing a copy of the game in a store, this game surprised me simply because I could not remember hearing about it and it had game-play data reported through the Nintendo Channel; which is better than many games I know about and have tracked for a few years now on the Nintendo Channel, that don't have data reported yet.

Questions
Have any of you perhaps played the Wii, or DS, version of Space Camp? If so, is it a game you would recommend to other Wii and DS owners?
As for the Curiosity's landing on Mars, did any of you stay up and watch the coverage of it live Sunday night as well?

If you are interested in Space Camp, you can see a link to it on Amazon.com below:

Posted by coffeewithgames at 12:23 AM