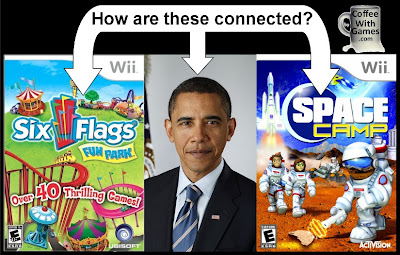 Just about 2 weeks ago, I put together the story, "Curiosity Inspired - Space Camp Hours Report". After I posted the story, a former developer who worked on the game saw the story and sent me an email. While the developer will remain anonymous, they were glad to see coverage on the game and wanted to share information on the "...background on the development process, and also why the game dropped with zero marketing...".

How are Space Camp, Six Flags Fun Park, and President Obama connected? What decision by President Obama is given as a reason to have possibly "killed all the synergy" around the Wii game Space Camp? What about bankruptcy? Brew yourself a fresh pot of coffee, and read the email below to find out!

The Brew
The former 7 Studios developer said, "OK, so back in mid to late 2008, 7 Studios was finishing work on Six Flags Fun Park for DS and Wii, published by Brash Entertainment. Brash had a lot of problems and ended up going out of business right when SFFP was supposed to release. The DS version made it to store shelves -- with zero marketing -- but the Wii title didn't. It had been approved by Nintendo for North American release and the discs, manuals and boxes were all printed and ready to go, but Brash went under before they could actually ship the game to distributors.

So we were all pretty bummed that this Wii game that we'd worked on for a year and half or so, and were pretty happy with, would never see the light of day. At the time our main LA office had only one other project, Scratch: The Ultimate DJ, published by Genius, so we were looking for other games.

We ended up signing the deal with Activision to make Space Camp. It was a very short development cycle, something like 4-5 months, with a small DS team and a small Wii team. How were we able to get a console title done that quickly? We re-used as much of Six Flags Fun Park as we could.

If you check videos on YouTube of Space Camp and SFFP you can see that the interface, engine, even many (maybe even a majority) of the minigames are identical. At the time we weren't too concerned as the DS version of SFFP got no marketing, and the Wii version was never released, so we were still shipping what was effectively a brand-new game for consumers.

When the Space Camp game was signed, if I remember correctly there was an expectation that President Obama was going to work with NASA and announce a new push for another US moon landing. The plan was that Space Camp would ride the wave of publicity around that and we'd be part of the marketing push for both NASA and the real Space Camp -- Activision had licensed their logo and possible new mascot.

Unfortunately due to the economy the President backed off on these plans, which killed all the synergy around the project. My understanding was that Activision had never planned to spend a ton of marketing money on the game, mostly seeking a cheap tie-in to the existing hype which never panned out. So it shipped and disappeared. The office responsible for publishing the game was Activision Minneapolis, which at the time was tasked with publishing the company's low-budget 'value' titles.

The really funny thing is that as we were working on Space Camp, Ubisoft bought the Six Flags Fun Park project from Brash as part of Brash's bankruptcy proceedings. They shipped the existing boxes, which were released to stores in March 2009, just two months before Space Camp! Ubisoft also had us make a version of SFFP for Europe, Fun Park Party. Apparently SFFP did well enough to justify another print run, but 7 Studios wasn't able to work on that directly as we were purchased by Activision.

So that's the story of Space Camp, and the related story of Six Flags Fun Park. Overall the team was proud of what we were able to accomplish on both games, in terms of what we could do with the time and resources we had, and it's always been disappointing that factors out of our control (Brash's bankruptcy, the backtracking of the new moon project) led to both titles underperforming.

Unfortunately 7 Studios didn't ship another title. The Scratch lawsuit happened shortly after we were purchased by Activision. After that we did prototyping and development work on console and iPhone, and we helped out with some tools and the downloadable demo for DJ Hero 2. Then in Spring 2010 Activision shut down their music/rhythm game division and that was the end of the studio."

Caffeinated Thoughts
I was glad a developer was willing to share feedback and an inside story on the development for Space Camp, and Six Flags Fun Park, giving us a small inside look of why certain decisions were made. They did say that, "...there may be a few minor errors..." in the story, but that they had fact checked dates to backup things from memory, and I did look at release dates and other information as well to make sure we were providing accurate information.

I personally found it interesting that Activision gambled on a new Moon mission being promoted by President Obama, even going as far as possibly getting licenses from NASA and the real Space Camp, but then not being able to move forward with their use because of President Obama's decision to not move forward with a new Moon mission; funding instead went to the Mars mission I believe. I can already see a political attack ad being formed, "Obama destroyed the video game industry, and your children's entertainment by cutting NASA's Moon funding!".

As for Brash Entertainment, the original publisher of Six Flags Fun Park, and how it came and went so quickly in the video game industry, here is a great piece on the company and its failure: "Brash fallout a cautionary tale".

Now, let's say you are in a store and you stumble upon Six Flags Fun Park and Space Camp, both at a great bargain price. How do you decide which one to try? Well, I asked the developer and this is what they said, "I can't recommend one over the other, it really depends on the player. If someone is really into NASA, they should go for Space Camp. If they like carnival games, they should go for SFFP. I think SFFP has more content overall than Space Camp does. In terms of the single-player story, Space Camp starts better but gets grindy near the end, while SFFP starts slow but has some really cool moments near the end."

You can see links to Six Flags Fun Park and Space Camp below:

Posted by coffeewithgames at 7:11 PM