Coffee Beans
If you are looking for information on the contest/giveaway of BIT.TRIP BEAT, Fieldrunners, SpaceChem, & Uplink you will find the link for more information on it in the "Caffeinated Thoughts" section below.

Metroid Prime 3: Corruption was released five years ago (today) in the U.S. on August 27, 2007. The game was developed by Retro Studios and published by Nintendo. It received an ESRB rating of "Teen" with "Animated Blood, Violence" listed as content for gamers and parents to be aware of, and the game released with a MSRP of $49.99.

How many hours have U.S. Wii owners reported playing Metroid Prime 3: Corruption over the last 5 years? Brew some coffee, and let's take a look! 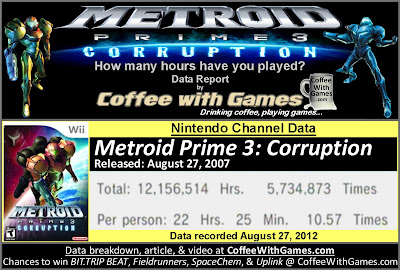 Corruption's play-time per day/session is still the same as last year's, 2 hours 7 minutes; and the game's overall reported average is the exact same as it was last year, still sitting at 22 Hours 25 Minutes "Per person" that has reported data as the image above shows.

Caffeinated Thoughts
Metroid Prime 3: Corruption, what do I think about the game? Well, if you missed my review (rarely happens, I know) for it from nearly 2 years ago, you can read it HERE. In short, if you enjoy the FPS genre with some exploration aspects, and Wii motion controls in FPS games, I highly recommend you give Corruption a try. If you are planning on purchasing the Wii U (it does play Wii games), you might want to look for the Metroid Prime Trilogy bundle since you should get "more for your money" with it, though it might be difficult to find at a reasonable price now. If not the bundle, you should be able to find a cheap used copy of Metroid Prime 3: Corruption either online, or at stores like Game Stop and Best Buy that have used games. If you have never seen any footage from Corruption, the video below is a very quick look at the game:


Seeing the average reported being 22 Hours 25 Minutes "Per person" makes me think most Wii owners that have reported data are completing the game just once, and not playing through it again. I played through the game multiple times, and I'll show how many hours I have played it in the comment section below by attaching my reported game-play hours image to my comment. I don't know why Nintendo stopped printing both Metroid Prime 3: Corruption and the Metroid Prime: Trilogy bundle, but I think they should add one of them to the Nintendo Selects lineup, and/or have them available to purchase on the Wii U's eShop when it launches later this year.

Questions
Have any of you played Metroid Prime 3: Corruption, perhaps in the last year even, and what did you think about the game? Good, or bad? If you have played through it completely, do you know how many hours you have played the game?
Also, do you think Nintendo should add Metroid Prime 3: Corruption to the Nintendo Selects games in some fashion?

If you are interested in the Metroid Wii games, you can see them linked below to their Amazon.com pages:

Posted by coffeewithgames at 11:48 PM