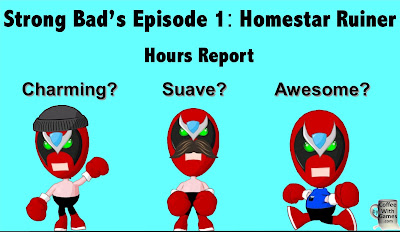 Coffee Beans
Strong Bad's Cool Game for Really Attractive People Episode 1: Homestar Ruiner was released on August 11, 2008 for the Wii through the WiiWare service at a price point of 1,000 Wii Points, which is $10. The game was developed and published by Telltale Games, and received an ESRB rating of "Teen" with "Crude Humor, Mild Cartoon Violence, Mild Suggestive Themes" being listed for gamers and parents to be aware of.

How many hours have U.S. Wii owners reported playing one of the longest titled WiiWare games released for the service? If you're a PC gamer, or a PS3 owner, how many hours can you expect from the first game in the series according to the Wii's data? Brew yourself some coffee, and let's take a look! 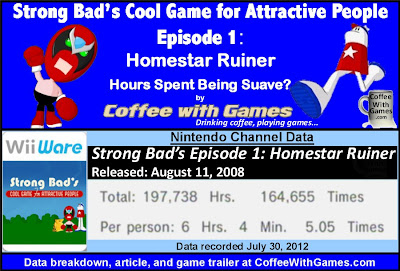 The Brew
Strong Bad's Episode 1: Homestar Ruiner has approximately 32,604 U.S. Wii owners that have reported game-play data through the Nintendo Channel, and the average play-time per day/session is 1 Hour 2 Minutes.
The game has a "professional" critic review score average of 76.76%, based on 25 reviews GameRankings.com. Like most other WiiWare titles though, there's no great location to find customer review scores for just the WiiWare release.
The Nintendo Channel does provide some player feedback though with a "What people are saying..." section. When asked, "To whom does this title most appeal?", the answer "Everyone" has been chosen by 75% of respondents with the remaining 25% voting "Gamers" as their choice. The second question "What gaming mood best suits this title?" has 83% that selected "Casual" and the remaining 17% selecting "Hardcore". The final question, "Is this title more fun alone or with friends?" had 73% of voters respond with "Alone" and the remaining 27% voting for "With Friends".


All 5 episodes of Strong Bad's Cool Game for Attractive People can still be purchased on the Wii's Shop Channel for 1,000 Wii Points each, which is $50 for all the games. If you have a PC or Mac though you can purchase the full series on Steam for just $29.99, or if you shop around you might be able to find the full retail PC version for just $19.99.
What about PlayStation 3 owners? From what I can tell PS3 owners get the best deal on the games, because they can get all five episodes for just $15. If each game in the series averages 6 hours of game-play like Episode 1 on the Wii does, this would mean PS3 owners could be looking at a solid 30 hours of game-play for only $15, which I think is really great and an even better buy if you're a fan of the web series.

I remember watching the trailer above when Episode 1 was releasing for the WiiWare service, but I haven't really followed the Strong Bad series. That being said, Telltale Games' newest episodic game series which they have already released two games for and are currently developing three more for, The Walking Dead, has me very interested. A friend is playing through the PlayStation 3 games, and the last I talked with him he was really enjoying them. He is a fan of the television series by the same name, The Walking Dead, and he thought that was one big reason he was enjoying the games so much. I ended up watching the first season after his comments, and I thought it was well done for what it was, enough so that I checked to see if there was a Season 2 available on Netflix. Unfortunately, there wasn't.

Questions
Have any of you perhaps played the entire Strong Bad's Cool Game for Attractive People game series? If so, did you play the Wii, PC, Mac, and/or PlayStation 3 version and do you remember about how many hours it took you to complete the full series? If you don't remember the total hours, do you perhaps remember if Episode 1 is the longest as of game-play hours?


If you have started playing The Walking Dead game series from Telltale Games and you have enjoyed the television series as well, would you recommend the games to fans of the television show? Also, do you know about how many hours Episode 1 and Episode 2 take to finish?


Here are a few items related to this post in some way that you may be interested in:

Posted by coffeewithgames at 3:36 PM