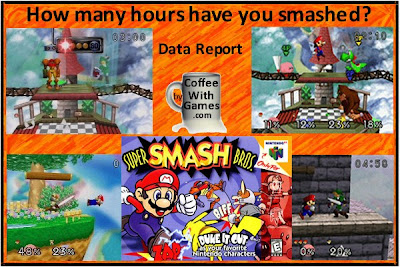 Coffee Beans
Super Smash Bros. was originally released for the Nintendo 64 in 1999. The game was developed by HAL Labortory and published by Nintendo. It was re-released for the Wii's Virtual Console in North America on December 21, 2009 at a price point of 1,000 Wii Points, which is $10. Super Smash Bros. on the Virtual Console maintained its original "Everyone" rating from the ESRB, with "Cartoon Violence" listed as content for gamers and parents to be aware of. 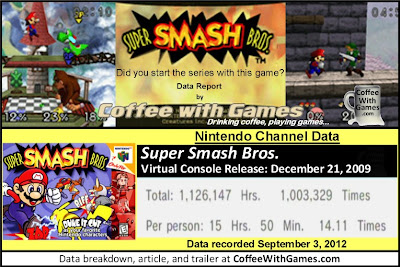 The Brew
Super Smash Bros. has 1,126,147 Total Hours of game-play reported, from approximately 71,107 U.S. Wii owners that have reported data since the game released. The average play-time per day/session is 1 Hours 1 Minute, with the overall reported average being 15 Hours 50 Minutes "Per person" as the image above shows.

Super Smash Bros.'s U.S. Virtual Console release has made Nintendo about $711,070, just based on the game's $10 price point and the approximate number of players that have reported data since the game released.

Is Super Smash Bros. worth 200 Club Nintendo coins though? I think based on the customer reviews for it, and the average time played being nearly 16 hours "Per person", that it is. The one thing I'm wondering that will hopefully be answered on September 13th, is how easily the transfer process will be for my Virtual Console games from my Wii, to the new Wii U console when it releases on November 11th (I know, it's not confirmed 100%, but I have my reasons for thinking it).

If you are not familiar with Club Nintendo and how it works, you can visit this link, https://club.nintendo.com/, to learn more and set up a free Club Nintendo account. You have until September 16th to get 200 Club Nintendo coins to redeem them for Super Smash Bros., but if you have a few unregistered Wii games around, it shouldn't be too difficult.

If you own the Virtual Console version of Super Smash Bros., would you recommend it to Wii owners that perhaps have not played the series before, but are interested in it?

You can see a link to Super Smash Bros. on Amazon.com below, and a few Nintendo related items:

Posted by coffeewithgames at 6:48 PM