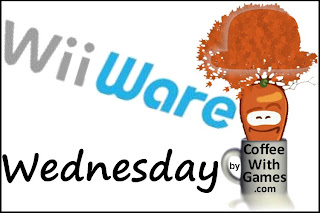 Coffee Beans
Bonsai Barber was released for the Wii's WiiWare service on March 30, 2009 in North America, at a price point of 1,000 Wii Points, which is $10. The game was developed by Zoonami and published by Nintendo, and received and ESRB rating of "Everyone" with "Comic Mischief" listed as content for gamers and parents to be aware of.

Do the reported hours for the game show it to be "a cut above the rest" of other WiiWare games? How many hours can you expect to get from Bonsai Barber if you have never played it? Brew yourself a fresh pot of coffee, and let's take a look! 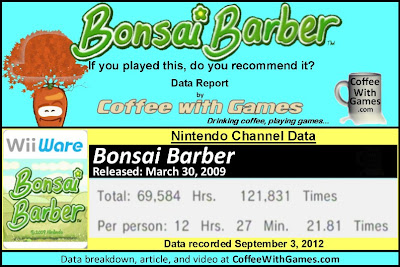 The Brew
Bonsai Barber has 69,584 "Total Hours" of game-play reported, from approximately 5,586 U.S. Wii owners that have used the Nintendo Channel with 1,253 days possibly reported. The game has an average play-time per day/session of about 34 Minutes, with its overall reported average play-time being 12 Hours 27 Minutes "Per person" as the image above shows.

Bonsai Barber's U.S. release has made about $55,860 since it released, just based on the number of players that have reported data and the game's $10 price point.

Caffeinated Thoughts
I remember seeing a trailer for Bonsai Barber when it was releasing, and thinking that it looked like an original idea, but an odd one. It reminded me of a Saved by the Bell episode though, so that was a good thing, being that I enjoyed Saved by the Bell a great deal when I was younger.

If you have no clue what Bonsai Barber is about, the trailer below should give you a brief glimpse at the game and what you can expect from it:

Seeing Bonsai Barber with an average of over 12 hours "Per person" I think is pretty great for a $10 WiiWare title, and I think the average hours "Per person" make it a cut above the rest, or at least most other WiiWare titles. It seems to me that this game might be a good choice for a portable version on the 3DS, based on the average time per day/session being about half an hour. Perhaps something like what happened with the WiiWare title Fluidity, and its recently announced 3DS version?

Questions
If you have played Bonsai Barber, is it a WiiWare game you would recommend to other Wii owners? Do you know how many hours you played the game, perhaps before setting it aside and not picking it up again?

Do any of you practice bonsai in real life?

Posted by coffeewithgames at 2:59 PM