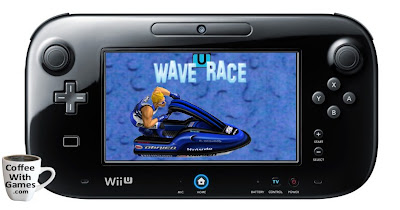 Coffee Beans
What happens if you don't drink enough coffee? You may write a post with a "semi-caffeinated prediction" that ends up not being fulfilled. Or, you may miss links for your chance at a FREE PlayStation 3 game, Double Dragon: Neon, HERE, or even a FREE Wii U system HERE.

Wave Race 64 released on November 5, 1996 for the Nintendo 64 in North America. The game, like F-Zero X, was developed by Nintendo's EAD studio and published by Nintendo worldwide. Wave Race 64 was released again, digitally in North America, for the Wii's Virtual Console on August 6, 2007 at a price point of 1,000 Wii Points. The Virtual Console release received the updated ESRB rating of "Everyone" with no content listed for gamers or parents to be aware of.

Did you skip out on Wave Race 64, but have been interested in it? How many hours can you expect from Wave Race 64, at least according to the Nintendo Channel data? Brew yourself some coffee, and let's take a look! 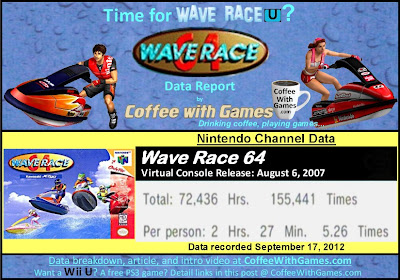 The Brew
Approximately 29,551 U.S. Wii owners have reported playing Wave Race 64 through the Wii's Nintendo Channel, now with more than 5 years possibly reported. The players have reported 72,436 Total Hours of gameplay since the game released on the Virtual Console service, with the average play-time being just 2 Hours 27 Minutes "Per person" (or Wii console) that has reported data. The average per day/session reported played is just over 27 Minutes, which simply means that each time a Wii owner sits down to play Wave Race 64, they are spending about 30 minutes with the game before moving onto something else.

Wave Race 64 has made Nintendo about $295,510, based on just the $10 price point and the approximate number of U.S. players that have reported data.

Caffeinated Thoughts
Just over a week ago, I wrote my "Wii U - Caffeinated Predictions, Thoughts, & Wishes" post in which I detailed what I was hoping we would see from Nintendo's Wii U preview event. I ended the post with a "semi-caffeinated prediction" saying I thought that "Wave Race Wii U will be announced as a launch title for the system."

Well, if you watched the conference you know my prediction failed, like Michael Pachter often does, and my prediction/wish/hope for a Wave Race Wii U game was not fulfilled. I blame a lack of coffee (never the lack of sleep)!

Perhaps you have never seen what Wave Race 64 looked like? The video below is from the game's introduction screen, and should give you a good idea of the graphics in it:


I didn't own Wave Race 64, but one of my cousins did and we played it a lot. I find the average hours reported "Per person" for the Virtual Console version a little surprising, because I remember having a blast with the game in both the single-player and the multiplayer racing options, and probably spending 2 hours playing it in just one day (or, afternoon back then).

While my Wave Race Wii U prediction failed to come true, I'm wondering if perhaps Nintendo is simply going to re-release Wave Race: Blue Storm from the GameCube as a Wii U eShop title now? Instead of releasing a new Wave Race title for the Wii U, maybe Nintendo will be updating the GameCube title with HD graphics and online features? One can hope!

Also, do any of you think it's time for a new Wave Race title for the Wii U, with full HD graphics on and online leaderboards and/or races?

If you are interested in Wave Race 64, you can download it to a Wii console for $10. Also, see the N64, Game Boy, and GameCube versions linked below:

Posted by coffeewithgames at 11:33 AM