Coffee Beans
Ahoy, me hearties! Sid Meier's Pirates! released for the Nintendo Wii on September 28, 2010 with a MSRP of $39.99. The game was developed by 2K China, Firaxis Games, and Virtuous and published by 2K Games. It received an ESRB rating of "Everyone 10+" with "Alcohol Reference, Mild Language, Mild Violence, Suggestive Themes" listed as content for gamers and parents to be aware of.

***Avast ye! Are ye looking for details on the Wii U and PS3 booty giveaway? Aye? Check me "Caffeinated Thoughts" section below! Savvy?***

How many hours have U.S. Wii pirates reported pillaging the seas in Sid Meier's Pirates! since the game released almost 2 years ago? Batten down the hatches, brew yourself some coffee, and let's take a look! 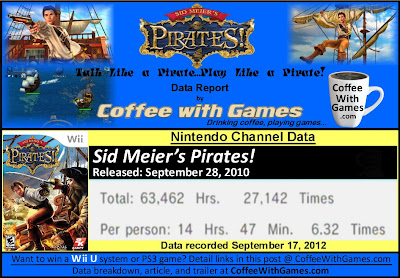 The Brew
Sid Meier's Pirates! has approximately 4,294 U.S. Wii owners that have reported being scurvy dogs through the Nintendo Channel, with 720 days possibly reported. The game has 63,462 Total Hours of gameplay reported, with its overall reported average being 14 Hours 47 Minutes "Per person". The average play-time per day/session is about 2 Hours 20 Minutes.

Caffeinated Thoughts
I have not played Sid Meier's Pirates!, or any of the Sid Meier's games that I can remember. If ye have not seen any footage from the Wii version, the video below might give you an idea of what you can expect:
I wasn't sure what to expect for average hours "Per person", but seeing the game sitting near 15 hours "Per person" I think is pretty good, especially considering you can find the game for under $20 on Amazon.com. If your local GameStop store carries it, you should be able to grab it for under $10 there.

Questions
Did ye talk like a pirate yesterday (still my today) for Talk Like a Pirate Day? More importantly did ye play like a pirate, perhaps in Sid Meier's Pirates! or another pirate related video game?

If ye played Sid Meier's Pirates! on the Wii, would ye recommend it to Wii owners that are looking for a fun, pirate-themed, video game? If ye had played the older Pirates! games, did ye find the new Bombardment and Lock Picking Wii mini games fun? Or, prefer to stick with the standards?

If ye are interested in pirate related games, ye can find some below!

Posted by coffeewithgames at 2:01 AM