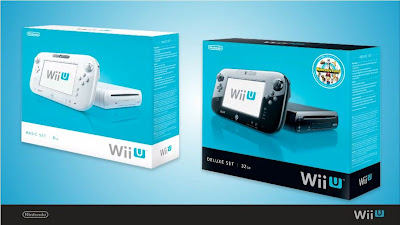 Coffee Beans
Nintendo's Wii U press conferences have come and gone like Bowser and the Princess at the beginning of a Mario game. Nintendo had press events in Japan, North America, and Europe on Thursday to detail the Wii U's release dates, prices, and games for those regions.

I like to let at least 24 hours pass after events before writing out my "final" thoughts on them, and with this I have allowed more than 72 hours for more details to surface. Being that I grind and brew my coffee in the U.S., this post will mainly be about the U.S. Wii U details.

What does a coffee addict think of Nintendo's Wii U system details revealed on Thursday (and since)? Brew yourself a few cups of coffee, take a look at the system details, and then some caffeinated thoughts!

A picture says a thousands words I've heard, so below are two images from the Wii U Facebook I put together for a side-by-side shot., which will show you the Wii U Basic Set and Wii U Deluxe Set launch bundles. Price, release date, and accessories included with each are shown. Take a look:

If you want the fully roasted text version of the images, here's what I have...

As mentioned above, the Black Wii U Deluxe Set has a MSRP of $349.99. If it's not clear from the image and text (drink some coffee first), the extra $50 will get you a physical copy of Nintendo Land, 24GB of extra internal storage, the GamePad Charging Cradle and GamePad Stand, a Wii U console stand, and the Deluxe Digital Promotion which is a rewards type program for Wii U owners that might be purchasing digital content/games on the Wii U's eShop. 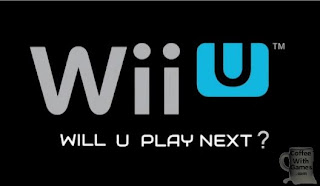 Caffeinated Thoughts
As the Nintendo event started up Thursday morning, my coffee was just starting to brew. When Reggie said, "Wii U arrives in U.S. stores in another 66 days.", I did the math super quick and knew November 18th before he even said it. My first thought was something like, "Call me Pachter! My prediction was wrong!"

While I originally thought releasing the Wii U on November 18th would be late and miss one key game launch this holiday season, I don't see it as a horrible. Why? Well, there was a report of production issues with the Wii U console (GamePad related) that makes me think Nintendo isn't worried about getting the Wii U out sooner, because more than likely the supply is going to very limited and will probably remain sold out during the holidays. 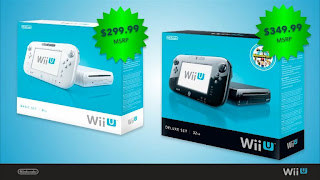 As for the prices of both Wii U bundles, I think they are $50 too much if they remain at those prices very long. I agree with Michael Pachter though, that Nintendo shouldn't have a problem at these prices during the holiday season, and it allows them to have some price drop room if they need it. That being said though, if you are planning on buying a Wii U during the launch this year I think the Black Wii U Deluxe Set is the best value, because of what is included with it.

On the games, I thought the demo of Metroid Blast from Nintendo Land was great, and showed good use of the Wii U GamePad's asymmetric gameplay capabilities. New Super Mario Bros. U, as of now, is already a purchase for me, so it didn't really matter what they showed.

LEGO City: Undercover was my BEST. OF. SHOW. (More on that later. Deserves its own post.)


Seeing Call of Duty: Black Ops 2 officially announced for the Wii U was great. I thought its use of the GamePad for a "splitscreen" multiplayer option was brilliant, and I'm very glad to see Treyarch trying new things with it. Also, I'm glad to know that Michael Pachter was wrong in his statement on Activision demanding the Pro Controller or no Wii U Call of Duty, and I'm glad that Treyarch took the stage and used the GamePad and didn't simply guitar smash it to the ground, then stand on top of it with the Pro Controller smiling.

The Wonderful 101 looks really interesting to me, and I like how bright and crisp the visuals appear to be. I think the graphical style will remain fresh for years to come, as it appears to have a stylized "cartoon" look to me.

When Bayonetta 2 was announced as a Wii U "exclusive" published by Nintendo, it didn't really excite me because I didn't play the first game; but it did give me some hope that Nintendo is willing to work/pay third party developers for exclusive Wii U games, and hopefully content.

The one "new" feature Nintendo talked about that I thought was interesting and certainly bold, but not worth the amount of time dedicated to it, was Nintendo TVii. I would rather there have been a Nintendo Direct conference in October explaining Nintendo TVii in fuller detail, than them spending nearly 20 minutes of the Wii U press conference on it. Especially considering things they didn't address, that I feel are more important about knowing and seeing how Nintendo has, or hasn't, improved in certain areas.

Let me get my bitter thoughts out of the way now. Perhaps using bullet points will be the best way to do this, so I don't go into a 500 page blog post.

So, what things didn't I like about Nintendo's Wii U press conference overall? The lack of information about the Wii U console features:
As for online play in Nintendo Land, I honestly don't see why that is not in the game, or maybe it is and Nintendo will reveal it in a Nintendo Direct video in October? Call me a skeptic though, because Nintendo has a pretty terrible history of not having online play in their Wii mini-game collections (Wii Sports, Wii Sports Resort, Wii Play). I would love to be proven wrong though.


So, did the Wii U conference convince me to buy the Wii U on November 18th when it releases? No. But, it did show me Nintendo has taken at least one small step in the right direction in working with third parties to get exclusives (Bayonetta 2), and seeing Black Ops 2 confirmed for the system was great as well.

While I'm not 100% settled on buying a Wii U day one, I was the first customer at my GameStop to reserve the Wii U system, and I chose to reserve the Black Wii U Deluxe Set. What's that mean? Well, I have 2 months to figure out if I will keep my reservation on the system, or cancel it. I'm really hoping Nintendo addresses the online aspects and Nintendo Network features of the Wii U, and I really hope to hear the words "There are no friend codes on the Wii U system", before it releases in November.

Questions
Are there any of my "Caffeinated Thoughts" you agree with, or disagree with? Do you agree that Nintendo Land should have some form of online functionality?

Was there one Wii U game that stood out to you above the others, for any reason, like LEGO City: Undercover did to me, and that you would give a "Best of Show" award?
Posted by coffeewithgames at 4:16 PM