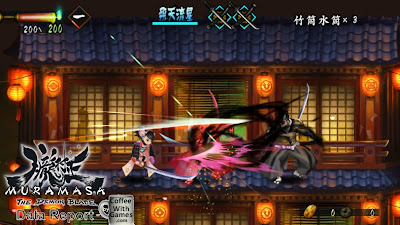 Coffee Beans
Muramasa: The Demon Blade was released on September 8, 2009 with a MSRP of $49.99. The game was developed by Vanillaware, and published by Ignition Entertainment for its North American release. It received an ESRB rating of "Teen" with "Alcohol Refernce, Fantasy Violence, Suggestive Themes" listed as content for gamers and parents to be aware of.

A portion of the description on Amazon.com says, "The creators of the acclaimed PlayStation 2 hit, Odin Sphere, return with the single player, action RPG, Muramasa: The Demon Blade. Steeped in the ancient mythology of Japan, Muramasa: The Demon Blade tells a tale of possessed souls, forgotten pasts and unimaginable destinies. A Wii exclusive, filled with expertly hand animate graphics and gameplay that transitions seamlessly between player-controlled elements and story sequences it is an adventure only to be experienced on the Wii."

How many hours have U.S. Wii owners reported playing Muramasa: The Demon Blade since it released just over 3 years ago? Brew yourself some coffee, and let's take a look! 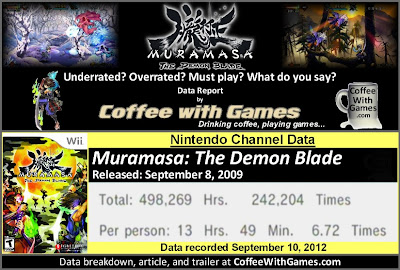 The Demon Blade's play-time per day/session is 2 Hours 3 Minutes, and the overall reported average is 13 Hours 49 Minutes as the image above shows. The reported 498,269 Total Hours of game-play is an increase of 444,760 Total Hours since the first report.

Caffeinated Thoughts
While I have not played the game, I have seen many positive comments from players of Muramasa on articles, forum threads, and reviews for the game around the internet. If you have not played Muramasa and have never seen the art style of the game, the short trailer below will give you a decent idea of how the game looks in action:


I think the reported average being almost 14 hours "Per person" shows the game was probably played through once, but then not really played again by most players. While the game originally released with a MSRP of $49.99, it can be purchased much cheaper now from sites like Amazon.com and even GameStop.com.

Being that I haven't played it, I may need to add this to my "bargain bin" game hunting list and keep a lookout for it considering how high the customer review score average is.

Questions
If you have played Muramasa: The Demon Blade what do you think about the game? Based on the critic review score average, do you think it was underrated or overrated based on your time with the game? Or, do you not care about the reviews and just think that the game is a must play for any Wii owner?

If you played the game did you average about 14 hours on just one play-through, or did you complete it multiple times?

If you are interested in the game, you can see a link for it on Amazon.com below:

Posted by coffeewithgames at 1:47 PM