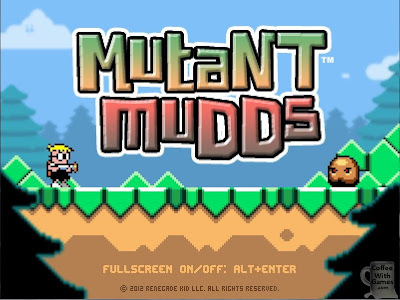 Coffee Beans
Mutant Mudds was released last week on August 30th, for PCs everywhere. A portion of the game's description reads, "Love pixels? Fond of platformers? Is there a special place in your heart for the 8-bit and 16-bit era? Want to have fun? Yes!? Well, you've come to the right place, my friend. Mutant Mudds is a '12-bit' action platformer full of pixels and platforming fun!"

Being that I have a fondness for platformers, I took advantage of an early sale price and downloaded Mutant Mudds for my PC 2 nights ago, and I have already played through several of the levels. How far have I made it battling the filthy Mutant Mudds, and what do I think of the game so far? Brew yourself some coffee and take a look!

The Brew
I have made it through 15 levels in Mutant Mudds so far, with Level 4-2 being the last one I finished. Of the 15 levels completed, 14 have been the main levels and one has been a secret, or neo-retro, level. Each main level I have played had 100 Golden Diamonds spread around them, and you can collect the Golden Diamonds to upgrade Max's equipment in Grannie's Attic, which is located on the level select screen.

I have been playing the game with the default control setting which is mouse and keyboard, but it does support the Xbox 360 controller as an option, and it allows you to customize the keyboard and/or gamepad if you want that option as well. You can see an image of Mutant Mudds' controls customization box in the image below to get an idea of what you can do: 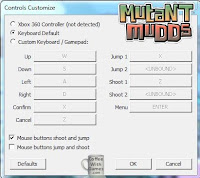 When I posted up the, "Mutant Mudds gets official PC release date, price, & trailer!" piece last month, a visitor, Hover, commented about the 3DS version saying, "And even as the levels get harder and harder, you never get more than 4 minutes to finish a level."

If you own Mutant Mudds on the 3DS and perhaps have been a little frustrated with only having 4 minutes to finish levels, I have some good news for you about the PC version. Mutant Mudds for your PC has a timer in the levels, but not a set time to finish them in. I tested it in Level 1-1 and let the timer run past the 4 minute mark to make sure, and the music just kept on playing.

While Mutant Mudds for the PC doesn't have a 4 minute limit per level like the 3DS version, finishing the levels as quickly as possible is highly encouraged in the PC version. How? The PC version has on-line leader boards that allow you to upload your times and compete against other players for completing the levels the fastest. Has my coffee drinking helped any in my speedrun attempts? The image below shows you where I was able to rank on Level 1-1 the first night of playing the game:


Caffeinated Thoughts
I'm really enjoying the challenge of the platforming elements in the game, and I like how the game is set on three different 2D plains that Max goes between during some levels. I can honestly see how this effect would benefit from the 3DS' 3D screen, but the solution they came up for it on the PC works very well.

As for "enjoying the challenge", Level 1-4 has proven to be the most challenging for me so far. Why Level 1-4? The game has fading platforms placed throughout levels, adding a bit of difficulty to your typical spiked pit jumps. The fading platforms will appear, then fade away, then appear again; with the fading/appearing pattern usually being 1-2 seconds.

Level 1-4 has a spot where you have to jump across two alternating fading platforms in a row, and beneath the platforms is a nice bed of spikes waiting to break your fall. Spikes are instant death in Mutant Mudds, no matter how many hearts you have, and I made my bed in the spiked pit many times at that spot.


The image above is from the spot in Level 1-4 that I was having issues with, and it might help you understand the fading/appearing platforms a little better. I probably tried the spot 20 times, before finally timing my jumps correctly and making it across grabbing both Golden Diamonds along the way.

I think the music in Mutant Mudds fits the "12-bit" theme extremely well, with Level 1-1 and Level 2-1 having my favorite tunes so far. If you are a fan of chip-tune music in games, you can listen to (even download) the soundtrack for the game, HERE.

Like the music, I think the art style used for Mutant Mudds fits the "12-bit" theme really well. I like the brightness of the levels, and seeing small graphical details on certain objects in levels I think is really awesome. The fact Renegade Kid took time to add the little details I think is great, and if you are just running through the levels quickly though, you might miss the little details that have been added to certain objects. The screenshot below is from Level 3-2 in Mutant Mudds, and you can notice how a fire/lava heat reflection of sorts, has been added to the platforms above the lava. The platform that is up and to the left of Max's head in the screenshot (behind the "100"), does not have the same heat reflection. Attention. To. Details.


I believe I have encountered all of the enemies in Mutant Mudds, and so far I think Royal Mudd and Pork Plop are my favorite enemies in the game. I remember being surprised when I was first attacked by Royal Mudd, simply because I wasn't expecting the attack! Pork Plop has been the most surprising to me, because I wasn't expecting the range of its attack. Almost all of the enemies in Mutant Mudds appear to be, well, muddy, and each one usually goes away in splatters when defeated.

As for the default control setting I have been using, it works well enough for me, though I can see how some might prefer using something like the Xbox 360 controller perhaps for comfort. I do suggest playing the game in "FULLSCREEN" mode though if you are using the default controls, because I have gotten to clicking away in the game and have accidentally clicked off the game screen while playing, which will cause the game to pause and can throw off your momentum.

Just based on my time with the game over the last 2 days, I definitely recommend Mutant Mudds to fans of retro-platforming games. I believe it is challenging enough for the price, and if you are picking it up for the first time don't expect to speed through the levels right away. While it may take a little bit to learn the play mechanics and how to handle Max properly for platforming success, once you do, you should get a solid number of enjoyable platforming hours out of the game.

Questions
Did any of you purchase Mutant Mudds for your PC since its release last week? If so, how far have you made it in the game, and have you been able to place in the "Top 10" leader board on any level?

If you own the Nintendo 3DS version of Mutant Mudds, does the removal of time limits per level, and the addition of on-line leader boards make you more likely to purchase the PC version, if you haven't already?


If you are interested in purchasing Mutant Mudds for your PC, you can do so from GOG.com, GAMERSGATE.com, Desura.com, and The Renegade Shop. If you have a Steam account, Mutant Mudds has been submitted for Steam's Greenlight project, and you can vote for it HERE.
Posted by coffeewithgames at 3:55 PM