Coffee Beans
Other than the "Grounds for Celebration! Award - LEGO City: Undercover" post, I haven't seen this really talked or written about anywhere else, and I did "google" for it.

How did Nintendo representatives respond when asked if LEGO City: Undercover had any form of multiplayer, local or online? What was the reason for confusion on whether the game has multiplayer? Brew yourself some coffee, and let's take a look!


Last week when I was working on the other post for LEGO City and about to publish it, I noticed the official page for the game and the fact sheet on the game had different information about the number of players that will be able to run around LEGO City.

The official page for the game, HERE, shows "No. of Players: 1", while the fact sheet for the game shows "Players: 1-2". I "googled" for other posts on the topic, looking for an announcement on it, but I didn't find any post that was specifically about the multiplayer option in LEGO City: Undercover, or any post that even talked about it really.

So, I sent over an email to the press contact for the game, and waited on a response. 24 hours passed, and I didn't receive a response, which I thought was kind of odd. Jeremy from NintendoFuse.com offered to send an email over, seeing if perhaps they could get clarification on the issue for me.

He did. The question he sent over was the question I had pretty much asked, "Does, LEGO City: Undercover have a multiplayer option?" and he mentioned how the official page and the fact sheet showed different things.

The response he received was, "The game is 1 player. No co-op/multiplayer of any kind.", with the representative apologizing for the confusing language on the site and fact sheet. Pretty straight forward, right?

Well, yesterday, I decided to send one more email about it, just to attempt one last time from my side to get an answer before posting up the other story. I asked, "Does LEGO City: Undercover have a multiplayer option? Perhaps, a co-operative play mode like in other LEGO games?"

I received a reply shortly after that said, "We are looking into this and will get back to you soon." Interesting.

I wasn't sure what "soon" was, but only about 5 minutes later I received a second response that said, "Please refer to the fact sheet that states there are 1-2 players."

With the time that my emails took to be responded to, I would imagine they were trying to get clarification from Nintendo on what they could/couldn't say about the multiplayer options in the game, which still isn't much other than verifying the game will have some form of a 2 player mode. 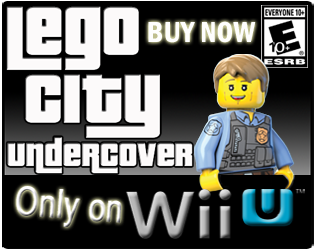 Caffeinated Thoughts
Many of the past LEGO video games have featured local co-op multiplayer on Nintendo systems, so that could be one option. Some of the LEGO games on the PlayStation 3 and Xbox 360 have featured online co-op, as well as local, so that multiplayer option would make sense as well.

After seeing the trailer for the game though, I'm wondering if there might perhaps be some sort of "hide-and-seek" mode in the game using the Wii U's GamePad. One player would run around the city with either a Wii Remote and Nunchuk combination or a Wii U Pro Controller attempting to "hide", while the player with the Wii U GamePad could use the controller's scanning capability as they showed in the trailer for the game (seen below in the awards video), to try and locate the other player in the city.


I think a "hide-and-seek" sort of mode in LEGO City: Undercover, even if only as a local option, would be fun with its "open city" setting and perhaps a good way to use the GamePad for a multiplayer feature.

Also, a big thanks again to Jeremy for trying to help me out last week! You can visit NintendoFuse.com HERE, and enter their "Ultimate Mario Kart 7 Competition - Win a Wii U" contest HERE.

Questions
Are any of you planning to purchase LEGO City: Undercover when it releases for the Wii U? Would a multiplayer feature in the game make you more likely to buy it, or would it not really matter to you?

Any predictions as to what the 2 player mode will be in the game?

If any of you are interested in LEGO City: Undercover, you can pre-order the game on Amazon.com and GameStop.com below: Posted by coffeewithgames at 7:28 PM