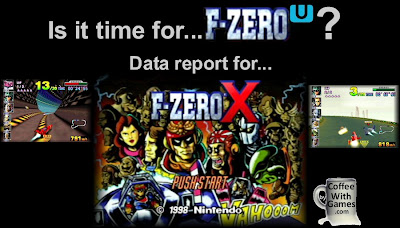 Coffee Beans
First, if you're looking for details on how to possibly win a Wii U console, keep reading through the "Caffeinated Thoughts" section below.

F-Zero X was originally released for the Nintendo 64 on October 26, 1998. The game was developed by Nintendo's EAD studio and published by Nintendo worldwide. F-Zero X was re-released for the Wii's Virtual Console on June 25, 2007 at a price point of 1,000 Wii Points, which is $10. The Virtual Console release maintained its original ESRB rating of "E" with no content listed for gamers or parents to be aware of.

If you have never played the F-Zero series, but perhaps are interested in the series, how many hours can you expect from F-Zero X for only $10? Brew yourself some coffee, and let's take a look! 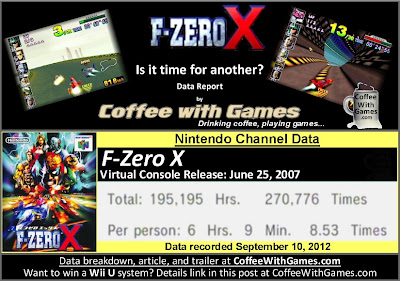 The Brew
F-Zero X has 195,195 Total Hours of gameplay reported, from approximately 31,743 U.S. Wii owners that have reported gameplay hours through the Nintendo Channel since its U.S. release. The game has an average play-time per day/session of about 43 Minutes, and its overall reported average is 6 Hours 9 Minutes "Per person" as you can see in the image above.

F-Zero X's U.S. Virtual Console release has made Nintendo about $317,430, based on just the $10 price point and the approximate number of players that have reported data.

Caffeinated Thoughts
While I have never owned any of the F-Zero games, I do believe I played the original SNES F-Zero, as well as F-Zero X on the N64 and F-Zero GX for the GameCube. If you have never see how F-Zero X looked, and how the races were setup, the brief trailer below should give you a decent idea:

I'm not sure that the $10 price is a good price for the game though, based on the average hours played "Per person". Being that it has been just over 9 years since the last new F-Zero game was released for a Nintendo home console, that being F-Zero GX for the GameCube in August 2003, I think it is time for a new F-Zero on the Wii U. Or, at the very least, an "updated" F-Zero game like what Nintendo did with Star Fox 64 3D and The Legend of Zelda: Ocarina of Time 3D.

If you are looking for the details link on how to win a Wii U console, you can find "The Ultimate Mario Kart 7 Competition - Win a Wii U!" details HERE.

Questions
Do any of you think it's time for a new F-Zero game? Perhaps on the Wii U when it releases, or even on the 3DS?

If you have played F-Zero X from the Virtual Console are the hours reported "Per person" about what you can expect to get from the game before you beat it, or can you expect many more based on your time with the game? Also, if you are a huge fan of the F-Zero series, is the one game from the series that you would recommend above all the other F-Zero games?

If you are interested in the F-Zero series, you can see a few of the games linked below:

Posted by coffeewithgames at 1:29 PM