How many hours can you expect from Metroid: Other M? Data Report

Coffee Beans
Metroid: Other M was released on August 31, 2010 with a MSRP of $49.99. The game was developed by Team Ninja with CG portions made by D-Rockets, and it was published by Nintendo. Metroid: Other M received an ESRB rating of "Teen" with "Animated Blood, Violence" listed as content for gamers and parents to be aware of.

How many hours have U.S. Wii owners spent playing Metroid: Other M since the game released just over 2 years ago now? Brew yourself some coffee, and let's take a look! 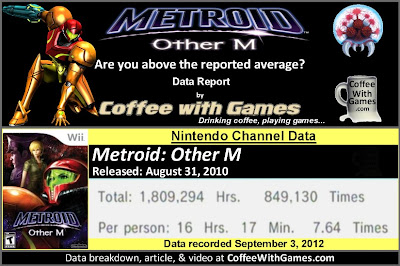 Other M's play-time per day/session is now 2 Hours 7 Minutes, and the overall reported average has increased slightly over the last year, now sitting at 16 Hours 17 Minutes as the image above shows. The reported 1,809,294 Total Hours of game-play now is an increase of 481,021 Total Hours since the report last year.

Caffeinated Thoughts
I own Metroid: Other M now, thanks a great sale at Best Buy where I purchased the game for only $5 over the Christmas holiday this last year. Even though I own it, I still have not played the game. As a matter of fact, Metroid: Other M is not even in our house right now, as I loaned it out to our neighbor about 2 weeks ago (the same neighbor I'm borrowing Batman: Arkham Asylum from). I haven't had an update from him yet, so I don't know if he has made any progress in the game yet, or what he thinks of it.

If you missed how Nintendo advertised Metroid: Other M when it was released 2 years ago, you can see one commercial below for it:

One thing I'm wondering about, is with Wii games like Metroid: Other M that shipped with known glitches, will Nintendo make an effort to get them on the Wii U's eShop and have them properly patched up, or will games like Other M stay on the Wii console in retail format only?

Questions
Have any of you played Metroid: Other M in the last year, and if so, would you recommend it to other Wii owners? Also, do you remember how many hours you put into the game and are you sitting around the reported average "Per person", or perhaps well above or below it?

If you are interested in Metroid: Other M for the Wii, you can see links for the game on Amazon.com and GameStop.com below:

Posted by coffeewithgames at 8:42 PM