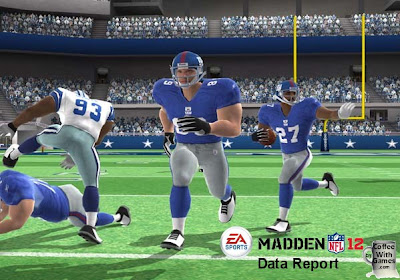 Coffee Beans
Madden NFL 12 was released on August 30, 2011 for the Wii at a MSRP of $49.99. The game was developed by HB Studios and published by the EA Sports division of Electronic Arts. The game received an ESRB rating of "Everyone" with no content descriptors listed for gamers and parents to be aware of.

With the college football season having started last weekend, and now the NFL season officially starting up tonight, I figured now would be a good time to look at how many hours U.S. Wii owners have reported playing Madden NFL 12 since it released last year. So, brew yourself some coffee, and let's take a look! 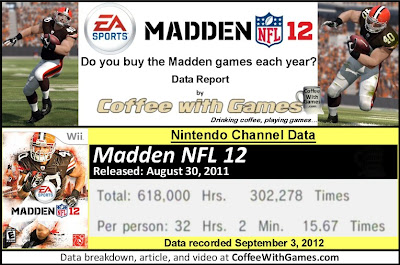 Caffeinated Thoughts
The 2012 NFL season has officially kicked off tonight (just about 45 minutes ago now), with the Giants playing the Cowboys. The last NFL video game game I purchased was in July 2004. After that purchase, due to EA signing the exclusivity contract with the NFL, I have not purchased another NFL video game since; though I have played a few and I believe I have Madden NFL 09 in my PlayStation 3 collection that a friend gave to me.

If you have not seen what Madden NFL 12 looked like for the Wii last year, the video below will give you a look at the different graphical style the developer went with for the Wii version:

Though Mrs. Coffee and I don't have cable television, I do play in an ESPN NFL Fantasy Football league and have done so for about the last 4 years. While I won't watch many (if any) of the games this NFL season, I will keep track of most of them each week because of the league.

As for the reported data, seeing Madden NFL 12 having more than 30 hours averaged "Per person" in just over a year I think is pretty good, especially considering it was the 6th Madden NFL Wii game to be released for the system.

If you're wondering about the title, have you read The Hunger Games book series? If not, I suggest giving them a read. You can buy the entire book series HERE, so there's no need to delay anymore, then the title might make a little more sense.

Questions
Did any of you play Madden NFL 12 for the Wii, or even other consoles, and did you think it was a solid Madden game? Did it do anything better, or worse, than previous games in the Madden series? If you played Madden NFL 12, or perhaps even just purchased Madden NFL 13, is the Madden NFL series one that you purchase every single year?

Also, if you're a football fan, do you have a favorite NFL team you are cheering for and hoping makes it to Super Bowl XLVII?

If you are interested in the Madden NFL games, you can see a few linked below on Amazon.com:

Posted by coffeewithgames at 9:22 PM