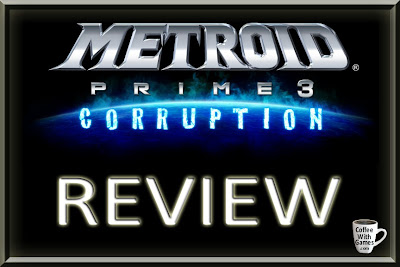 The Blend
Metroid Prime 3: Corruption was released in North America on August 27, 2007, with a retail sale price of $49.99.  Metroid Prime 3 was developed by Retro Studios and published by Nintendo.  It was the third console entry in the Metroid Prime series, and the first Metroid Prime game to be on the Wii.

I first reported back in January, after looking at Amazon.com data and statements from Nintendo, it appears that Metroid Prime 3: Corruption and Metroid Prime Trilogy on the Wii are no long being published.

The Brew
Controls - The controls in Metroid Prime 3 are really good, for the most part.  You move forward and backward using the joystick on the Nunchuk and you turn left/right and look up/down by pointing the Wii Remote's IR reticule in those directions.

You can increase or decrease how fast you turn under the options menu, and from my experience, I suggest setting the look sensitivity to "Advanced", as it allows you to turn and look around the fastest.  You jump by pressing the B button, and shoot with the A button.

The Nunchuk's C button changes you into the morph ball, and the Z button is used for targeting and grappling enemies; or for using the grapple to swing in certain locations.

The -(minus) button is used to bring up Samus' visors screen, while the +(plus) button is used to go into Hypermode.  If you press the 1 button, it will open your map screen and allow you to change control settings, as well as see your inventory and current objectives.

One little control issue I had with Metroid Prime 3 was jumping when as the morph ball.  The game has it set up where you do a quick flick of the Wii Remote UP, causing you to jump when in the morph ball phase.  This works most of the time, but occasionally I would flick the Wii Remote and it wouldn't register in the game.  It's not a huge issue, but you may find it a little aggravating if you miss a jump.

Another slight control issue I had, was when trying to grapple onto either enemies or items, occasionally it wouldn't register my motions in time; sometimes allowing a boss to get back up, which was aggravating.

Overall, I really think the controls helped to immerse me more into the game.  Though I had slight issues with the grappling and jumping in Morph Ball form, the use of motion controls in the game I feel helped make it a more engaging experience.

Graphics/Animations - I have played many Wii games, and I think Metroid Prime 3's graphics are really great, and the art style/direction for the game was a great choice.

As for the animations in the game, I think Retro did a good job with the transition of going into the Morph Ball, and coming out of it, helping to make it really believable.  I also thought the death animations of the different bosses were done really well.

If you aren't familiar with the Metroid Prime games, when you are in the first-person perspective, the view appears as though you are looking through the front of a helmet with a visor down.  I think an interesting part of the game-play, is the ability to use a few different visors for different elements of game-play.  An example of one visor in the game, is the Scan Visor.  When you switch to the Scan Visor, you can use it to scan objects and creatures in the environments, and it will store the information in a logbook for future reference, if you need it.

The enemies in Corruption are varied.  Some enemies walk/jump around, other enemies are clinging to walls/ceilings; and other enemies fly around.  The variety of enemies in Metroid Prime 3 really allows the player to experience the capabilities of the Wii Remote and Nunchuk controls in a first-person shooter setting.

There are several planets in Metroid Prime 3, where the game-play happens.  You travel to the different planets to stop the spread of the enemy, and sometimes you will find out you can't accomplish certain goals without a proper suit/weapon upgrade; and that upgrade may be on a planet you visited earlier in the game, which will require you to visit it again.


Revisiting planets to search for suit/weapon upgrades is where I think Metroid Prime 3 is more of an adventure/exploration type game, than a first-person shooter.  The game encourages you to explore different sections of each planet, where you may find suit/weapon upgrades, or tokens to unlock items.

I think the game is well paced between the adventure and shooting aspects though, as many times you will work your way through an area on the map, find a suit/weapon upgrade, and then almost immediately find yourself in a situation to use the new upgrade in a battle of some sort.

I thought the levels in Metroid Prime 3: Corruption were designed well, especially Elysia and Bryyo.  Elysia is a sky town, kind of like Cloud City from Star Wars, but more open.

Bryyo had several puzzles that I enjoyed, and one of the puzzles was extremely difficult to figure out when I was trying to get 100% of the items in the game.  I enjoyed the puzzles though, because they made me think in the levels; and I appreciate how much effort Retro put into making the game with quality play-time.

Here's a picture to hopefully explain what I'm talking about with the boss arenas. 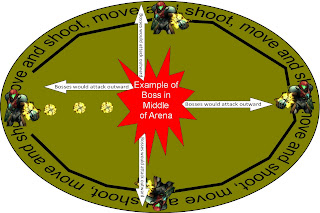 While I found the boss arenas, and strategies for defeating them, were a little repetitive, I thought the boss designs themselves were nicely varied.

Sound - Metroid Prime 3: Corruption has a nice assortment of music and sound effects.  I really enjoyed how the game's music changed according to what parts of the planets I would be on.  I thought the music really helped to set a great atmosphere in the game.

The voice acting in Metroid Prime 3: Corruption was good, but limited.  You shouldn't find yourself stuck on cut-scenes wishing you could skip them, or the dialogue.

I think the sound effects of your ship, weapons, and enemies were all done properly; not being annoying or distracting in any way, and helped add to the overall game-play experience.

Replay Value - Metroid Prime 3: Corruption was my first Metroid Prime game to play.  My first time I played Metroid Prime 3 on the "Normal" difficulty setting, I logged right over 25 hours of game-play, on the game clock.

Before I purchased and played Metroid Prime 3: Corruption, I thought I would play through the game once, and then put it away like I had done with many games before it; this was not the case with Metroid Prime 3 though.

When I completed it on Veteran, I decided just to try the game on the Hyper Mode difficulty, because I had heard how hard it was and wanted to see if what I heard was true (sounds a lot like my Call of Duty: World at War Wii experience). After seeing how much harder the enemies were on just the first level Hyper Mode, I wanted to try and beat the entire game on the Hyper Mode difficulty setting. Just over 14 hours of game-play later, I completed Metroid Prime 3: Corruption on Hyper Mode.

Initially, my total game-play time for all three play-throughs on each difficulty setting was 55 hours; since then, my total game-play hours for Metroid Prime 3: Corruption has been multiplied by almost four, and it's my fourth third most-played Wii game to date.

The game also includes different unlockable items you obtain by spending "tokens" you collect while playing.  You can get tokens a variety of ways: scanning items with your visor, beating bosses, getting different numbers of enemy kills, killing enemies in certain ways, etc.

Also, Retro included something called "Friend Vouchers" in the game.  The difference between Friend Vouchers and tokens, is that you can't spend the Friend Vouchers.  The only way to unlock everything is to have another person that has played Metroid Prime 3: Corruption send you their very own Friend Vouchers.  When you receive their Friend Vouchers, they are then converted to Friend Tokens, and can be spent on some unlockable items.

Aftertaste
Issues/Problems - I have already listed a few small complaints, here is a more complete list of issues/problems I had with the game, that you may find annoying yourself:
Also, when traveling between planets the game uses in-game cut scenes to disguise load times between the planets. This isn't something I see as a HUGE issue, but it is something some people may find aggravating. 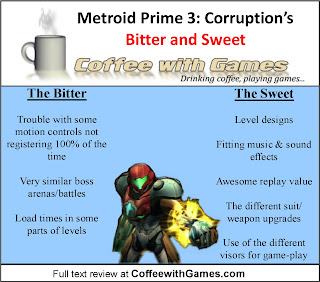 Metroid Prime 3: Corruption was my first Metroid Prime game to play in the series, and I HIGHLY recommend Wii owners that enjoy FPS games and even think they may enjoy the Metroid Prime 3, to give the game a try.

From the game's graphics and art style, to the music and level designs, then topping it off with what were the best FPS controls on the Wii at the time, the game really surprised me and I enjoyed it far more than I expected I would.

I have played and beaten The Legend of Zelda: Twilight Princess and Super Mario Galaxy on the Wii, but my experience with Metroid Prime 3: Corruption far surpassed both of those games for me.

Questions
If you have played Metroid Prime 3: Corruption, what did you think about it? Do you agree with my overall thoughts on each section?  If not, let me and the other readers know what you don't agree with.  If you have any questions about the game, or a certain portion of my review, please leave a comment or send me an email at Scott@CoffeewithGames.com.

If you are interested in Metroid Prime 3: Corruption, you can find a link for it to Amazon.com below:

Posted by coffeewithgames at 3:23 AM