Super Mario Galaxy 2, how much has it been played? U.S. Wii Nintendo Channel data report 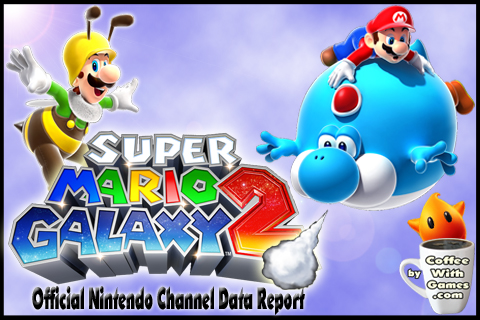 Coffee Beans
E3 is right around the corner and while Nintendo won't be holding their typical E3 press conference, they will be doing a Nintendo Direct for the Wii U on June 11th, and smaller conferences at E3 as well. The Wii U's first 3D Mario game is supposed to be shown this year, and even be at E3 in playable form (maybe even at the Best Buy E3 Wii U demo stations?).

Before looking forward at the Wii U's first 3D Mario title, with whatever trailer and news Nintendo shares at E3, let's take a look at one of the Wii's 3D Mario action/platforming games: Super Mario Galaxy 2.

Super Mario Galaxy 2 released for the Wii on May 23, 2010 with a MSRP of $49.99, and received an ESRB rating of "EVERYONE" with "Mild Cartoon Violence" listed as content for parents and gamers to be aware of. The game was developed by Nintendo's EAD studio, like the original Super Mario Galaxy was as well.

If you own a Wii or Wii U and haven't played Super Mario Galaxy 2, but are interested in it, how many hours can you expect from it? Brew yourself some coffee, and let's take a look at the official U.S. Wii Nintendo Channel data to see how many hours Wii owners have reported playing the game, and the average hours reported so far!

The 23+ million Total Hours of reported game-play is more than half the time span of the world's recorded history. If you're not sure what that is, it means Super Mario Galaxy 2 has been played for more than 2,500 years worth of time.

From the Nintendo Channel data reported, U.S. Wii owners have averaged playing the game 35 Hours 28 Minutes, which averages out to about 2 Hours 2 Minutes played per time reported. 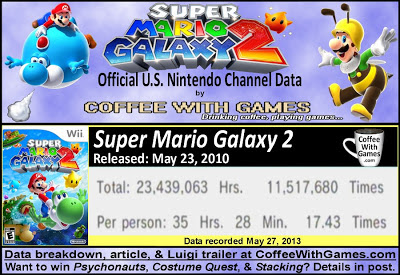 How have the critic and customer reviews changed for the game since we looked at the game in May 2011? Well, Super Mario Galaxy 2 still ranks in the Wii's "Top 10" games according to critics' reviews averages on GameRankings.com, and its review score average is slightly higher now at a 97.35%, based on 56 reviews on GameRankings.com.

Caffeinated Thoughts
Super Mario Galaxy 2 is not a game in our Wii/Wii U collection, and it's one I still haven't played. If we did end up getting it now, I would play it on our Wii U in the system's Wii mode though, due to me trying to limit the disc drive use in our Wii.

If you have never seen any footage from the game, here's a trailer for it that might get you interested, especially if you're a fan of Luigi and are happy about the "Year of Luigi":

If you are a Wii U owner and didn't own a Wii, you probably know by now that the Wii U is backwards compatible with Wii games (unlike the Xbox One and PlayStation 4?). So, if you haven't played Super Mario Galaxy 2, you can play it on your Wii U if you have the proper Wii Remote and Nunchuk controllers.

I know many consider the Super Mario Galaxy Wii games to be the best looking games for the system. I think it will be interesting to see if the Wii U's 3D Mario keeps the same graphical art style as those, and really shows what the system can do (I hope), or if Nintendo will change it up like what has been done with the Zelda games over the years.

I'm thinking the Wii U's first 3D Mario game might even be titled Super Mario Universe, continuing off the "Galaxy" theme; but Nintendo could just throw a "U" on the end like they did with New Super Mario Bros. U, and call it Super Mario U. No matter what they call it though, I am interested to see the art style of the game and what direction they have gone with it.

While I'm thinking the setting will be more like the Super Mario Galaxy games, I kind of hope they do a throwback to Super Mario 64's setting with Princess Peach's Castle being where you run around and select levels from.

Now, if you want a chance to win Psychonauts, Costume Quest, and Stacking as the image above mentions, here's what to do. Make sure you are following me on Twitter, HERE. Then, tweet out this post using the Twitter button beneath the post (seen in the image below if you're not sure), and include the hashtag #SuperMarioGalaxyCoffee and tweet it to @NintendoAmerica. The winner has been announced, HERE.

Questions
Have any of you perhaps recently played and beaten Super Mario Galaxy 2, if so, what'd you think about the game? If you played the original SMG and SMG2, which one did you enjoy more?

Also, with Nintendo revealing the Wii U's first 3D Mario action title in just a few weeks (12 days really!), is there anything you're hoping to see from the game?