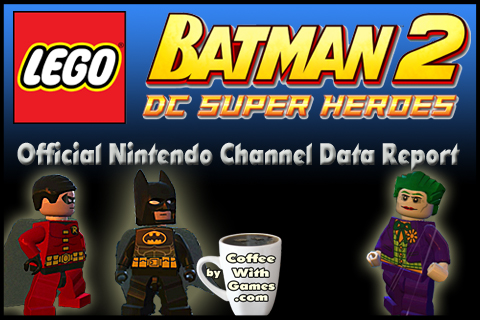 Coffee Beans
LEGO Batman 2: DC Super Heroes (LB2) was developed by TT Games and published by Warner Bros. Interactive Entertainment. The game released last June for the Wii, (and the 3DS, DS, PC, PlayStation 3, PS Vita, and Xbox 360) with a MSRP of $39.99. The game just released for the Wii U, and has a MSRP of $49.99. Both Wii and Wii U versions of the game received an ESRB rating of "EVERYONE 10+" with "Cartoon Violence" listed as content for gamers and parents to be aware of.

How many U.S. Wii owners have data reported for the game, since it released last year? Also, with the Wii U version of LEGO Batman 2: DC Super Heroes now out, how many hours can you expect from the game if you have never played it? Brew yourself some coffee, and let's take a look at the official U.S. Wii Nintendo Channel data! 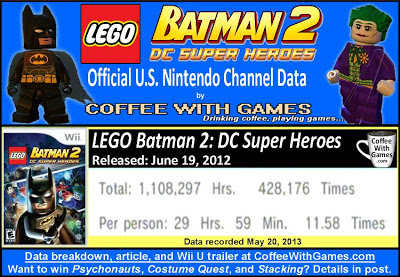 The Brew
LEGO Batman 2: DC Super Heroes now has approximately 36,975 U.S. Wii owners with the 1,108,297 Total Hours of game-play data reported, with about 335 days reported. This is an increase of just over 33,000 U.S. Wii owners that have had game-play data for the game reported, since its debut hours report last July. Also, the reported Total Hours have increased by over 1,000,000 Total Hours just since last report, which is excellent for a Wii title less than a year old.

The game's average reported play time of 29 Hours 59 Minutes "Per person", averages to be about 2 Hours 35 Minutes played per time reported through the Nintendo Channel. This means that if you play LEGO Batman 2 like the average U.S. Wii owner has, you should be able to expect at least around 30 hours of game-play from it.

Caffeinated Thoughts
The description for the Wii U version says, "Batman and Robin return in LEGO Batman 2: DC Super Heroes for Wii U. Experience one of the best-selling games of 2012 with new and enhanced gameplay utilizing the Wii U GamePad. With help from other famous DC Super Heroes including Superman, Wonder Woman, and Green Lantern, the Dynamic Duo are in for a fight to put the notorious villains Lex Luther and The Joker behind bars and save Gotham City."

I still haven't played either of the LEGO Batman games, but just tonight I watched the Wii U trailer for LEGO Batman 2 about 20 times in a row (seriously), with Bean 1 and Bean 2. Bean 1 was then repeating one of the lines from it, after watching it so much! If you haven't seen the trailer for the Wii U version, it shows off some of the "enhanced gameplay" Wii U features with the GamePad. Take a look:

I personally think the two player mode, with player one using the GamePad and player two having the TV is an awesome setup. We have LEGO Pirates of the Caribbean, and Bean 1 and I have played it together. The way the screen starts attempting to split up in it, can be a bit confusing to him, but with the Wii U's GamePad element he could concentrate on one screen and myself (or, the Mrs. or even Bean 2 one day) on the other.

While LEGO Batman 2's Wii U price is currently more than double that of the other console versions, I think for some LEGO game fans the local co-op using the Wii U GamePad might be enough for them to justify picking it up. If you don't own a Wii U (yet), you can get LEGO Batman 2: DC Super Heroes for under $20 on most of the other consoles now. Which with how many hours the game has reported averaged on the Wii, I think it's a great price.

Have you missed the first two opportunities to get entered for a chance to win Psychonauts, Costume Quest, and Stacking? If so, here's a third opportunity! Make sure you're following me on Twitter, HERE; and tweet out this post using the Twitter button below the post (pointed out in the image above if you're unsure which button), AND include the hashtag #LEGOBatmanCoffee and tweet it to @TTGames. The winner has been announced, HERE.

Questions
Have any of you played and beaten LEGO Batman 2 since it released last year? If so, what do you think about the game?

If you own a Wii U, are you interested in picking up that version, perhaps just because of the way the local multiplayer is done, with each player having their own dedicated screen?

You can see LEGO Batman 2 for the Wii and Wii U, and a few other Batman related items, below!

Posted by coffeewithgames at 11:53 PM