Fortune Street, how much has it been played? Official U.S. Wii Nintendo Channel data report 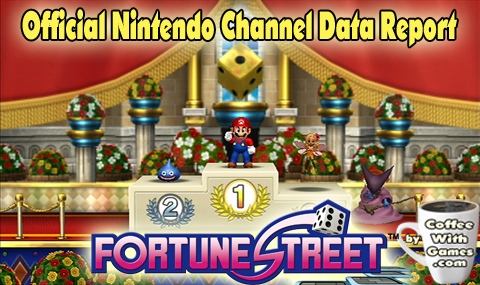 Coffee Beans
About 2 weeks ago, Matt from DigitallyDownloaded.net and I were exchanging some emails, and he inquired about the game-play hours for Fortune Street. It had been almost a year since I had last covered the game, and you can read the first Nintendo Channel data report on it, HERE. It has now been more than a year since I covered the game, so let's take another look!

Fortune Street released in the U.S. for the Wii on December 5, 2011, with a MSRP of $49.99. The game was developed by Square Enix, and published by Nintendo for its U.S. release. It received an ESRB rating of "EVERYONE" with "Comic Mischief" listed as content for parents and gamers to be aware of.

A description for the game on the Nintendo Channel says, "Players race around the board trying to accumulate wealth and hit a target value while buying, selling and trading property with friends and family to see who can be the first to cash out. What appears at first to be a simple property-buying board game offers multiple levels of money-maximizing opportunity."

The game has been out almost a year-and-a-half now, but how much has it actually been played? If you own a Wii or even now a Wii U, and skipped over Fortune Street when it released, how many hours might you expect from the game if you decide to buy it now? Brew yourself some coffee, and let's take a look at the official U.S. Wii Nintendo Channel data to see how many hours Wii owners have reported playing the game, and what the average hours "Per person" are reported so far!

Caffeinated Thoughts
If you have never seen any footage from the game, the trailer below might give you a decent idea of what to expect if you are familiar with board game video games:

I do find it interesting that Fortune Street has a higher reported average "Per person" than the Monopoly Wii games though, as those games should definitely have more name recognition here in the U.S. market, but perhaps the online multiplayer aspect in Fortune Street has really benefited the game.

Questions
Have any of you been playing Fortune Street consistently over the last year, and if so, do you know how your hours played compare to the average reported? If you play the game pretty consistently, how is the online community now? Is it easy to find an online game against other players, or is it better if you know people to play the game with?

Also, if you own a Wii U and Fortune Street for the Wii, do you think the game could benefit any in game-play because of the GamePad, if Square Enix was to port it over to the Wii U?

You can buy Fortune Street, and other board game Wii and Wii U (sort of) games from Amazon.com below:

Posted by coffeewithgames at 7:00 AM