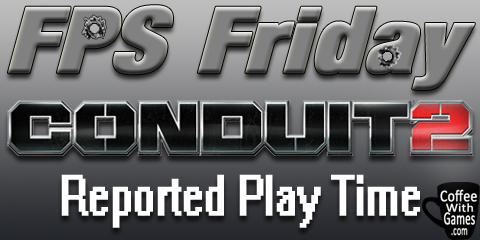 Coffee Beans
I never did play Conduit 2. If you missed my wall-of-text April Brewed post earlier today, you can see what games I played during April, HERE. If you already read the list, you may have noticed that I didn't play a FPS during the month. It was the first month this year that I had not played a FPS, but I did get a good bit of gaming done.

Conduit 2 released as an exclusive Wii FPS just over 2 years ago now, on April 19, 2011. The game received an ESRB rating of "TEEN" with "Animated Blood, Language, Mild Suggestive Themes, Violence" listed as content for parents and gamers to be aware of. It was the sequel to the other exclusive Wii FPS The Conduit, which released in 2009.

While there really hasn't been a hint of the Wii U getting Conduit 3 yet, did U.S. Wii owners enjoy Conduit 2? How many hours have U.S. Wii owners reported playing Conduit 2, since it released just over 2 years ago, and how do its averaged hours "Per person" compare to some other Wii FPS games? Brew yourself some coffee, and let's take a look!

The Brew
Conduit 2 now has approximately 13,736 U.S. Wii owners with data reported through the Nintendo Channel, which is more than double the number that had data reported about 5 months after it released. The 431,734 Total Hours of game-play now reported (seen in the image above), is an increase of just over 380,000 Total Hours from the game's initial data that was reported almost 2 years ago.

Its reported average play time of 31 Hours 25 Minutes "Per person", averages out to just over 2 hours for every time the game has been reported played. This simply means that U.S. Wii owners have played the game about 2 Hours 4 Minutes each time they sit down to play it, at least according to the reported data.

Now, has Conduit 2 been played more than GoldenEye 007 and Metroid Prime 3, as the image asks? As for the "Total Hours" reported, Conduit 2 is below both of those games, but in the average hours "Per person" section it's a different story.

Conduit 2 is now "neck and neck" with GoldenEye 007's average "Per person", being lower than it by just 3 minutes. Compared to Metroid Prime 3's average "Per person" though, Conduit 2 is almost 10 hours higher. This means that U.S. Wii owners that bought and played Conduit 2, apparently had more play time from the game than U.S. Wii owners of Metroid Prime 3. The hours "Per person" would be a reflection of the all important "replay value", that is often talked about for games. So, we can say Conduit 2 offered more replay value for its average player than Metroid Prime 3, but about the same replay value as GoldenEye 007, at least according to the official Nintendo Channel data.

If you're interested in reading an actual review, I suggest you read a review by Jeremy, of NintendoFuse.com, that he wrote for the game, HERE. He provided the number of hours he had spent in the game's single player and multiplayer before writing his review, which I appreciate seeing in reviews. Soon after Conduit 2 released, a controversy surrounding the game arose after one "professional" review of the game was published. If you missed what happened with the issue, you can read about it, HERE.

Caffeinated Thoughts
If you never saw any footage from Conduit 2, the trailer below will give you an idea of what weapons you can expect to be battling with in the game:

I think Conduit 2 having a higher average "Per person" than Metroid Prime 3, is a good example of why many companies focus on multiplayer aspects in games. Am I more likely to recommend a friend go out and buy a great single-player (only) focused game for $50 or $60, or am I more likely to recommend a game with online multiplayer and a single-player campaign (even if short), that I find myself playing on a more regular basis? Probably the latter.

Knowing how High Voltage tried to step up and support the Wii with a game genre that was/is popular, but not published very often on the Wii (compared to the other consoles at the time), I'm wondering if HVS will perhaps try to continue that for the Wii U? I wonder if they might release Conduit 3 for the Wii U, or perhaps even find a publisher to get behind The Grinder for the Wii U?

After the original The Conduit game, it really seemed like High Voltage Software was going to be able to try new things on the Wii, such as their once "Mature" themed Gladiator A.D. game, but something happened with their publisher relations. They made drastic changes to what they had originally shown for Gladiator A.D., instead releasing the more colorful "TEEN" rated Tournament of Legends, and another High Voltage FPS game in development, The Grinder, vanished from the Wii radar altogether. I know some seem to be thinking Nintendo is having third party struggles (still) with the Wii U, so I hope that Nintendo of America might be more open to publishing games such as what Gladiator A.D. once was, and even The Grinder.

Questions
If you own a copy of Conduit 2, do you know if the online community is still decent enough to hop online and get into a match quickly? If you played both games from the series, which one did you enjoy more?

If you were a fan of The Conduit and Conduit 2, do you hope that High Voltage Software perhaps makes a Conduit 3 sequel for the Wii U? Or, would you prefer them to instead release their once shown Wii FPS game that disappeared, The Grinder, for the Wii U first?

If you're interested in Conduit 2, it can now be found used for under $20 at GameStop and on Amazon.com (even new on Amazon from some sellers). You can also see both games from the series on Amazon below:

Posted by coffeewithgames at 8:02 PM