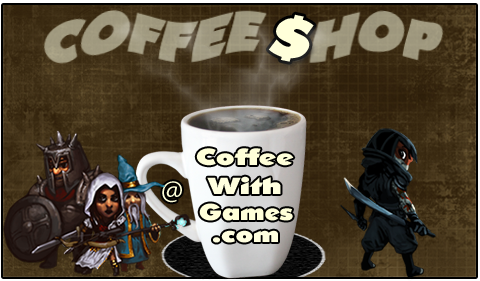 Coffee Shop
Next Friday, September 20th, the Wii U is scheduled to receive a $50 price drop at retailers. This will be the Wii U's first official price drop on the Wii U Deluxe Set, bringing its new suggested MSRP to $299.99.

Along with taking a look at some Wii U retail and eShop game deals in this post, I'll also highlight the current Humble Indie Bundle 9 deal that is taking place. So, if you're planning on buying the Wii U Deluxe Set at its new MSRP of $299.99 next week (or, perhaps already have it reserved and paid-in-full), or enjoy indie type PC games this might be a Coffee Shop post for you.

Brew yourself some coffee and see if any of the following game deals stand out to you, and if you would recommend any of them to your fellow gamers!

The Brew
First up, the Humble Indie Bundle 9 deal. Right now you can get Trine 2: Complete Story, Mark of the Ninja, Eets Munchies Beta, and Brütal Legend along with the soundtracks for Trine 2 and Brütal Legend for any price you want. You read that right. ANY price.

Now, if you're not familiar with the Humble Indie Bundle deals, here's the tagline for most of its indie sales, "Pay what you want. Support charity. Get awesome cross-platform games."

If you pay more than $1 for the games, you will not only receive the DRM-free direct downloads, but you will also receive a Steam key for the games as well. Humble Bundle also keeps track of what the "Average purchase" price currently is, and if you pay more than the average price, even by a penny, you usually unlock extra games. For Humble Indie Bundle 9, the extra games for paying more than the average are currently FTL: Faster Than Light and FEZ. What's the average price right now? $4.60 at the time of this post.

So, right now, for less than $5.00 you CAN get Trine 2: Complete Story, Mark of the Ninja, Eets Munchies Beta, Brütal Legend, FTL: Faster Than Light, and FEZ! Six games, with soundtracks for four of them!

Like many of the last Humble Bundle sales, I will probably end up buying this one at least once, if not twice to give one copy away as a gift here on the site! Based on my time with Trine 2 on the Wii U, I would say that game alone makes this worth buying, and I'm looking forward to eventually trying Mark of the Ninja.

If you want to see what the Humble Bundle is about, you can check it out at HumbleBundle.com, HERE.

*Look under the "More Buying Choices" on the right side of the page, under the "Add to Cart" area if you don't see Amazon.com listed as the main seller. You can often-times now buy the games from a third-party vendor on Amazon.com for less, and if you have had good experiences doing that continue doing so, but I try to be cautious with higher priced games.

This week, there are currently two Wii U eShop games on sale I would like to highlight, both of them 30% off or more from their normal prices, and both titles that I already own!

Mutant Mudds Deluxe is currently on sale on the Wii U eShop for just $6.99, a 30% savings off its normal $9.99 price. Mutant Mudds Deluxe should be on sale until September 26th, according to its eShop page, which is good for those of you that might not be getting a Wii U until next week!

I can easily recommend the game at this price, especially for those gamers that enjoy the platformer genre. If you missed my post on the game a few months back, here's a video of Bean 1 playing through the first level of Mutant Mudds Deluxe:

Toki Tori 2+ is the other Wii U eShop game on sale, and if you purchased the game when it originally released a few months back, as Toki Tori 2, your game will update to the newest version (automatically if you have that feature enabled). The game is currently on sale for just $8.99 until next Thursday, September 19th. If you're wondering, that's a savings of 40% off its regular list price of $14.99!

If you're curious as to what is included in this new updated of the game, check out the Toki Tori 2+ Huge Update trailer below:

While I haven't spent much time with Toki Tori 2 (now 2+) yet, I have enjoyed my short time with the game. Some of the puzzles I have already encountered really made me think, and the natural elements visual style reminds me of my backyard when I don't mow the grass as often as I should! It has a very nice, clean, crisp graphical style, that has been easy on my eyes. I do like the fact that Two Tribes has continued working to improve the game, based on feedback from players now many months after it released, as the trailer above showed. Hopefully the new update and current sale price will help get the game onto many more Wii U consoles this next week!

Caffeinated Thought
If you have played any of the Wii U games listed, retail or eShop, feel free to leave feedback for them below. For those that might be picking up the new The Wind Waker HD Deluxe Set Bundle, I think that watching the price on Nintendo Land between now and Christmas might be smart, especially if you family and friends to try out the local multiplayer games in it.

Questions
Have any of you played perhaps every game being offered in the Humble Indie Bundle 9, and have feedback on them like my opinion of Trine 2 making it worth picking up?
Posted by coffeewithgames at 6:35 AM