Coffee Beans
Well, it has been an interesting week. Sunday started off with the first official CoffeeWithGames Game Night playing some matches in Call of Duty: Black Ops II on the Wii U. Then Monday night I started working on putting together a video of one of the matches from the Game Night.

Before I digress into the video rendering issues I have experienced though, the video above is from the very first match of the CoffeeWithGames Game Night on Sunday. I believe it's also the very first video I have uploaded in 1080p, though I'm not very good at telling the difference between 1080p and 720p myself.

I have been using the Elgato Game Capture HD device since January of this year, and while I initially had some issues with rendering files out back in January in my video editing software, I quickly solved that problem. Then Monday happened. I tried rendering out one of the Black Ops II matches from the previous night, as I had done many times before with videos and trailer, but upon rendering the video out from the match, it became EXTREMELY blurry.

So, Monday, Tuesday, Wednesday, and yesterday (Thursday), I randomly spent time trying to fix the rendering issues. Again, I now capture my gameplay videos using the Elgato Game Capture HD, but I edit them together using Sony Vegas Movie Studio HD Platinum 10.0 edition, which is the video editing software I have used for pretty much the last 3 years.

No matter what I tried, how many times I re-recorded the match, re-rendered the video, it was always turning out extremely blurry after rendering the video. So, while my solution for what I HOPE is a permanent fix using Elgato video files with Sony Vegas Movie Studio HD, I think that's for another post altogether.

If you watched the video above, you can see the match went pretty well for the team I was on. I was able to play for just over an hour, and got in several more matches in the game, all playing just regular Team Deathmatch battles. The first match was actually my best match in terms of my kill/death ratio for the night, but I enjoyed all of the matches. 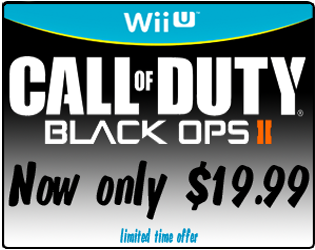 So, while the first CoffeeWithGames Game Night was a success in terms of getting some matches in, being that a new Call of Duty will be releasing in just over a month now for the Wii U, I'm not sure how many more Black Ops II Game Nights there will be!

Questions
Have any of you been playing Call of Duty: Black Ops II on the Wii U and enjoying it, but perhaps are now looking forward to when Call of Duty: Ghosts releases in November for the Wii U?

You can see new and used prices for Black Ops II on Amazon.com below, as well as the pre-order page for Call of Duty: Ghosts Wii U:


*Disclaimer: My copy of Call of Duty: Black Ops II Wii U was provided by Activision for coverage purposes.

Posted by coffeewithgames at 10:05 AM