Mutant Mudds Deluxe, easy enough for kids, hard enough for parents? One big difference between the PC and Wii U versions.

Coffee Beans
Mutant Mudds Deluxe released today on the Wii U and is available to purchase from the eShop for $9.99. The game was developed and published by Renegade Kid, and has an ESRB rating of "EVERYONE" with "Mild Fantasy Violence" listed as content for parents and gamers to be aware of.

I purchased the PC version of Mutant Mudds last year when it released, and you can read some of my impressions of that version HERE. Bean 1 (our oldest son) started playing the PC version, after watching me play it, and considering his age he is pretty good at the game using mouse and keyboard controls.

I was planning on buying the Wii U version today so he could play it with a more standard controller and button layout (like what he's used to with the Mario games); plus, I really enjoyed the PC version and wanted to play the new levels added to the Wii U version.

I saw that Renegade Kid was doing a contest giving away copies of the Wii U game. It was a drawing/art contest, but they even made it possible for a "non-artist" like myself to be able to enter, giving us an option to create a digital image or collage using existing images.

Did we win one of the contest giveaways? Brew yourself some coffee, and hit the jump to see the image I created (if you missed it already) for the contest, and a video of Bean 1 playing one of the levels in Mutant Mudds Deluxe on the Wii U! 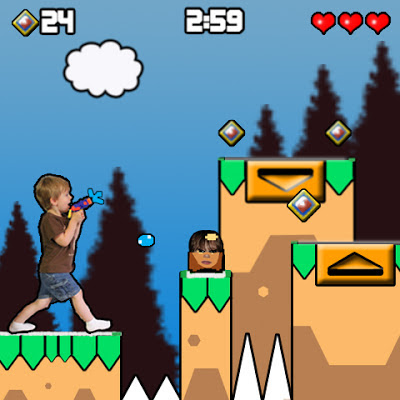 The Brew & Caffeinated Thoughts
The image above was the one I created for the contest, using an image from Mutant Mudds as inspiration. Instead of having Max in it though, I decided to involve the Beans, and make it like they were sucked into Max's world.

Yes, the Sacky Sit-Sits have taken the form of Bean 2, because he has inspired them with the muddy mess he makes along the way. Or, that was the idea, and Bean 1 has to clean up the mess while tracking down his younger brother.

Were we one of the winners though? We were!

Now, is Mutant Mudds Deluxe fun for the entire family, as the first image above says? Well, Bean 1 and I have both enjoyed our time with the game today. If you enjoy the platforming genre, or think you might enjoy the game, I do recommend you give this one a try.

Bean 1 was super excited to play it, and had been looking forward to the Wii U version after watching the trailer several times over the last week. Is Bean 1 any good at it? Here's a video of him playing through the first level in Mutant Mudds Deluxe:

Some of the levels in Mutant Mudds Deluxe are easy enough for kids to complete on their own, as the first image says, but many are challenging enough to probably require the help of a parent. Bean 1 is able to finish some of the levels without trouble, as you can witness in the video above, but in other levels he does request help.

One big difference between the PC version of Mutant Mudds and Mutant Mudds Deluxe Wii U is the timer in each level. The PC version has a timer that just keeps track of how long it takes you to finish a level, so you can spend 10 minutes in the levels hopping around if you want. The Wii U version of Mutant Mudds Deluxe has a timer that counts down though, and when it runs out you have to start the level over (or, at the last check point).

Having the timer count down makes Mutant Mudds Deluxe like the original Super Mario Bros. games, where each level had a timer counting down and you need to reach the end before it reaches "0:00". I think the timer might be a good thing though, as it might help Bean 1 to concentrate more on the task at hand of finishing the levels, but I'm not sure if it will be too challenging for him in some of the later stages.

Now, if Renegade Kid patches the Wii U version in the future, I think adding a "Timer Off" option, like turning off the check points is an option, might be a good thing to include.


Questions
Have any of you picked up Mutant Mudds Deluxe already, and if so, what do you think about it?

If you own a Wii U and haven't purchased Mutant Mudds Deluxe yet, and perhaps have some questions about it, feel free to leave them below!
Posted by coffeewithgames at 11:55 PM