On May 25, 2009, High-Voltage Software announced they were working on Gladiator A.D., a game exclusively for the Wii.


Here are some screenshots from both versions the game.  Click the images below to enlarge them for seeing the details better!  Descriptions of the images are beneath each them: 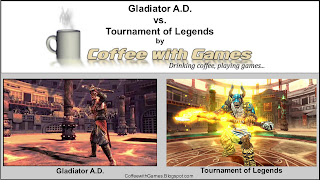 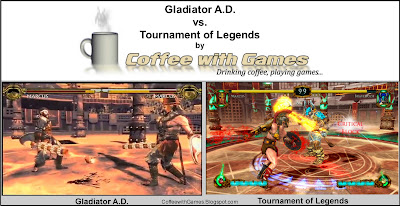 
Thoughts:
I was really impressed with what I saw coming from Gladiator A.D. and what it seemed that High Voltage was trying to achieve with it.
I'm not as impressed with what I've seen from Tournament of Legends(although it's only been screenshots).
A few things I was impressed about in Gladiator A.D., that I wish Tournament of Legends kept:
1)  Crowds:
I liked how HVS was trying to allow the player to win favor with the crowds in Gladiator A.D., and after winning the crowds favor, the player could, "...challenge the champions for fame, wealth, and in some cases, freedom...".
2)  Wii MotionPlus

(WM+):
Eric Nofsinger(HVS) told Matt Casamassina of IGN.com, "The Wii MotionPlus will be used to add variance to the attacks to break up what could possibly be seen as mechanical attacks.  For example, depending on the orientation of the player's wrist when a left slice is initiated, the gladiator will attack his opponents right side from one of three angles, making it slightly more difficult to perfect block...".  I thought this would make Gladiator A.D. a very strategic fighting game when WM+ was used, and I thought that would help set it apart.  It's been confirmed that Tournament of Legends will not use WM+.
Questions:
If you've known about Tournament of Legends, when it was known as Gladiator A.D., what do you think of the changes to the game?  Are you more excited about Tournament of Legends new style, or did you prefer the style of Gladiator A.D.?  Is there anything you wish Tournament of Legends had kept from the original version of Gladiator A.D.?
Tournament of Legends is releasing on the Wii on May 18, 2010, do you plan on buying the game from what you've seen of it, and what you know about it?
I'd love to know what you think, good or bad!
Also, I'm debating on using a "Jump Break" for some posts, this was one of them.  Do you prefer the posts to appear entirely on the main page, like they have been, or would you prefer a "Jump Break" for the longer posts?
Posted by coffeewithgames at 3:33 PM