Coffee Beans
Halloween 2012 is almost here, and over the next few days we will see how many hours Wii owners in the US have reported playing different zombie related games. Do zombies drink coffee? It probably depends on your definition of zombie, but apparently they do like shopping malls.

Dead Rising: Chop Till You Drop was released for the Wii on February 24, 2009 with a MSRP of $39.99. The game received an ESRB rating of "MATURE" with "Blood and Gore, Intense Violence, Language" listed as content for gamers and parents to be aware of.

How many hours of gameplay can you expect from Dead Rising: Chop Till You Drop, and how many more US Wii owners and hours have been reported battling zombies in Colorado with Frank West since the last report? Brew yourself some coffee, and let's take a look! 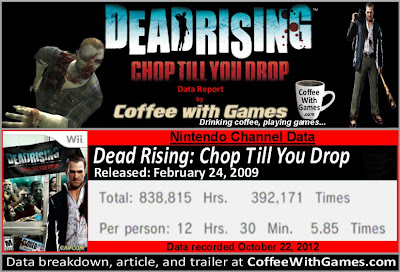 The Brew
Dead Rising: Chop Till You Drop now has approximately 67,037 Wii owners in the US that have reported hours of gameplay, with 1,336 days possibly reported. This is an increase of just over 27,000 more Wii owners that have reported gameplay data, in the last 2 years, since the first report on the game. The game has also seen an increase of about 370,955 more Total Hours reported, than was first shown reported.

The reported average play-time is now 12 Hours 30 Minutes "Per person" as the image shows, which is 45 minutes higher than the average just over 2 years ago. which now averages out to about 2 Hours 8 Minutes per day/session played.

Caffeinated Thoughts
I have never played Dead Rising, any version of it, though after getting in a zombie kick here lately with "The Walking Dead" series, I'm almost tempted to pick this up and see how it plays. If you have seen anything from "The Walking Dead" series, I think the term "mall walkers" is not only very appropriate to describe the zombies in Dead Rising on the Wii, but very ironic since that is a term for people that participate in mall walking.

If you haven't seen anything about Dead Rising on the Wii, the trailer below should give you a decent look at the game:

I think it's good seeing the average hours reported "Per person" continue to increase on this game, even if slowly, over the last 2 years. While I'm not in a rush to grab the game, if I'm ever looking for an extra used game in a "Buy 2, Get 1 Free" GameStop or even BestBuy used sale, I can remember this one should give me a solid 10 hours of gameplay, at the minimum.

Questions
Did any of you enjoy Dead Rising Chop Till You Drop for the Wii, and would you recommend it now as a cheap buy?

You can see a few zombie related games below:

Posted by coffeewithgames at 8:41 PM