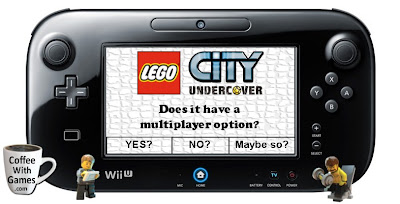 Coffee Beans
Does LEGO City: Undercover have a multiplayer option?

About 2 weeks ago now, I posted how Nintendo representatives had been back and forth on LEGO City: Undercover having some form of multiplayer, because the fact sheet for the game showed, "Players: 1-2", while the official page for the game showed, "No. of Players: 1". I waited patiently on responses from Nintendo representatives, and Jeremy, from NintendoFuse.com, even offered to send an email asking for clarification.

We both received two different responses though. The response Jeremy received basically said that LEGO City: Undercover does not have a multiplayer feature. The response I received, a few days after his, told me to refer to the fact sheet for the game which said, "Players: 1-2".

Well, I received another response a few days after those posts, and apparently the first response was the right one? Brew yourself some coffee, and take a look at the timeline of responses below, as well as another mention of multiplayer in the game from somebody that played it at E3 this year!


The Brew
Here are the dates and responses we received when Nintendo representatives were asked if LEGO City: Undercover has a multiplayer feature:

Nintendo has now updated the LEGO City: Undercover "fact sheet" to show "Players: 1", instead of what it originally showed as, ""Players: 1-2".

After my first post only on the topic, Jeremy posted it to his Facebook page. Take a look at the image below to see a conversation that happened on his post about multiplayer being for the game at E3: 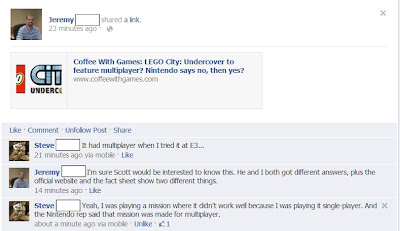 I contacted Steve directly on the issue of him having heard the game had multiplayer at E3 (that would have been in early June this year), and he said that is what he remembers hearing about LEGO City: Undercover from a representative while at E3. He even said he asked about online at the time, and they responded with a standard, "we cannot comment; nothing confirmed" type statement.

Caffeinated Thoughts
Even if LEGO City: Undercover doesn't feature a multiplayer option, I am still interested in the game. If you missed the Grounds for Celebration! Award video on the game, you can see it below:

What can we conclude though? Well, I think that LEGO City: Undercover perhaps started being developed with a form of 2 player in it. Most of the LEGO games that TT Games has developed have some form of multiplayer; whether local, or online. (Mrs. Coffee and I played through a few levels this last weekend together in LEGO Pirates of the Caribbean on the Wii.)

If LEGO City: Undercover does release without some form of multiplayer, I think it will be the first home console LEGO game within the last few years without a local co-op mode in it at the very least. So, maybe in the early development and testing of the game, the multiplayer feature wasn't working well and TT Games and Nintendo decided to take it out? The original fact sheet on the game showing 1-2 players, along with Steve's recollection of what he heard at E3, makes me think this is probably the case for the game.

If you are interested in LEGO City: Undercover, or LEGO City items in general, check out the links below:

Posted by coffeewithgames at 4:17 AM