Is Ōkami for the PS3 worth $20? How many hours can you expect from Ōkami? Data Report

Coffee Beans
Should you judge a book game by its cover? Can a video game's box art help sell it? I have a friend that loves wolves, almost anything to do with wolves. Right after he purchased a Wii he was in Game Stop looking around, when he noticed a white wolf on a game box. The game was Ōkami for the Wii, and he left Game Stop with Ōkami because the box art caught his attention.

Ōkami was originally released for the PlayStation 2, and originally developed by Clover Studio (now closed) and published by Capcom. The game was updated with Wii motion controls, and released for the Wii in North America on April 15, 2008. Both the PlayStation 2 and Wii versions of Ōkami received an ESRB rating of "Teen" with "Blood and Gore, Crude Humor, Fantasy Violence, Suggestive Themes, Use of Alcohol and Tobacco" listed as content for games and parents to be aware of.

If you're a PlayStation 3 owner and haven't played Ōkami yet, but are interested in the soon to be released PS3 version of the game, how many hours can you expect from it? Well, how many hours have U.S. Wii owners reported playing Ōkami and what is the average number of hours played "Per person"? Brew yourself some coffee, and let's take a look! 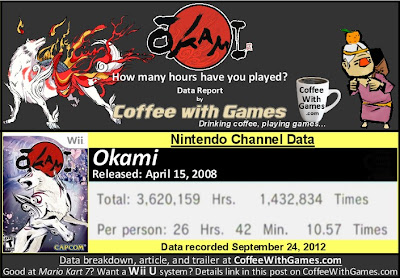 The Brew
Ōkami has approximately 135,556 U.S. Wii owners that have reported playing it through the Wii's Nintendo Channel, with more than 4 years possibly reported now.

As the image above shows, the players have reported 3,620,159 Total Hours of gameplay since Ōkami was released in the U.S., and the reported average is 26 Hours 42 Minutes "Per person" (or console) that has reported data. The average per day/session played is close to 2 Hours 31 Minutes.

When Ōkami HD releases this month on October 30th, it should easily provide PS3 owners with more than 20 hours of gameplay, just based on the reported data from Wii Ōkami players. If you're a fan of collecting every trophy available in PlayStation 3 games though, I would say you should expect to get more than 30 hours of gameplay from Ōkami HD.

Not only has the game been updated with HD graphics for the PS3 system, but a "full suite of Trophies" and PlayStation Move support have been added as well. I think the best part about Ōkami HD for PS3 owners, is that they will be able to get the game for only $19.99 when it releases.

*If you're interested in winning a Wii U system? Find the details of a contest for one HERE.*

Questions
Have any of you perhaps played both the PlayStation 2 and Wii versions of Ōkami and if so what did you think of both versions? Did the updated Wii motion controls improve the gameplay over the original gameplay in the PS2 version?

If you own a PlayStation 3, are you thinking about buying Ōkami HD when it releases on October 30th for the system?

If you are interested in Ōkami, you can see the Wii, DS, and PlayStation 2 Ōkami games linked below:

Posted by coffeewithgames at 4:00 AM