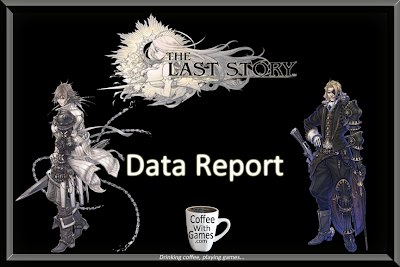 The Last Story released for the Wii on August 14, 2012 with a MSRP of $49.99. The game was developed by MISTWALKER, and published by XSEED Games for its North American release. The Last Story received an ESRB rating of "TEEN" with "Language, Mild Suggestive Themes, Use of Alcohol, Violence" listed as content for gamers and parents to be aware of. 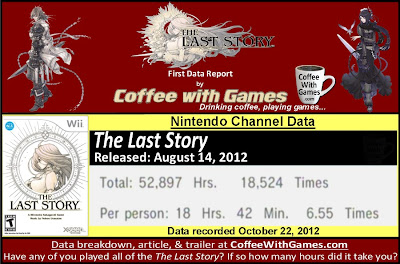 The Brew
The Last Story has approximately 2,828 Wii owners from the US that have reported 52,897 hours of gameplay through the Nintendo Channel, with 69 days possibly reported. The game's reported average play-time is 18 Hours 42 Minutes "Per person", which averages out to about 2 Hours 51 Minutes per day/session it is played.

Caffeinated Thoughts
I haven't played The Last Story, and I'm not sure if I will at this point. I have read a few comments about how it compares to the Final Fantasy games though, so I have thought about purchasing it for Mrs. Coffee to play, since she has enjoyed the Final Fantasy series a good amount.

I think seeing The Last Story have hours debut already on the Nintendo Channel is a positive sign for XSEED, and I really do hope they make a good profit on the game, even if only for taking a chance and bringing it over for U.S. Wii owners, when Nintendo wouldn't.

If you haven't seen anything about the game, here is the official US Trailer released by XSEED for the game:

While The Last Story took longer than the Nintendo published Xenoblade Chronicles to debut with hours, another Operation Rainfall game, the game did debut faster than another Nintendo Wii published title, Sin & Punishment: Star Successor; and it already has more hours averaged "Per person" than many other Wii retail titles that have been out for several years. So, to answer the first question above, The Last Story was faster than Sin & Punishment: Star Successor, but slower than Xenoblade Chronicles, in the number of days it took for the game to have hours debut on the Nintendo Channel.

I think it will be interesting to see if the average hours "Per person" continue to increase steadily over the next year, especially with the Wii U releasing next month and current Wii owners possibly playing the game on the new system, and it perhaps not having data reported.

Questions
Have any of you played The Last Story, and if so, is it a Wii game you would recommend to others?

If you have played and beaten The Last Story, how many hours did it take you to finish the main quest, and did you try the game online any?

If you are interested in The Last Story, you can find it on Amazon.com linked below:

Posted by coffeewithgames at 10:16 PM