What is the most played Just Dance Wii game? 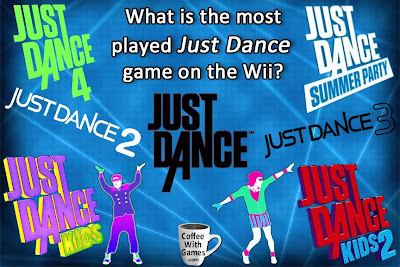 The Roast
The first Just Dance game released on November 17, 2009 for the Nintendo Wii. The game did not receive a typical professional review score average that would make you think it would become one of the best selling Wii games, but apparently many consumers ignored the "professional reviews" and bought the original Just Dance in droves. It has sold millions of copies and its success helped form a new major franchise for Ubisoft, with at least one new game for the series each year, since the original released.

In January this year, Ubisoft announced that since the series launched, it had sold more than 25 million copies. The Wii has had at least 8 games from the Just Dance series, from my count:
Another Just Dance title is releasing this Tuesday, Just Dance: Disney Party.

Which Just Dance game has become the Wii's most played "Per person" and also has the most total hours of gameplay reported, with so many titles for Wii owners to choose from? (Hint: It's not Just Dance 4.) Brew yourself some coffee, and let's take a look!

Just Dance 2 was released on October 12, 2010 with a MSRP of $39.99. The game was developed by Ubisoft Paris, and received an ESRB rating of "Everyone 10+" with "Lyrics, Mild Suggestive Themes" listed as content for gamers and parents to be aware of.

The data shown in the image below is for the gameplay hours reported from U.S. Wii owners, with 734 days possibly reported.

The 5,863,176 Total Hours reported for the game are equivalent to dancing for about 244,299 days, straight. That would be dancing 24 hours a day, 7 days a week, for just over 669 years. I think that would make for the longest "Just Sweat It Out" session!

Just Dance 4 was just released on October 9th for the PlayStation 3, Wii, and Xbox 360. The Wii U is not yet out (less than a month now!), but Just Dance 4 is scheduled to release 5 days before the system, on November 13th. The trailer below is for Just Dance 4, and promotes how the Wii U GamePad's streaming function will work.


Just Dance 4 on the Wii U currently has a MSRP of $49.99, which is $10 higher than the PlayStation 3, Wii, and Xbox 360 versions of the game. The game is releasing with three exclusive tracks for the Wii U version, as well as the Wii U exclusive Master of Ceremony and Puppet Master modes, and the ability to play Just Dance 4 off of just the Wii U GamePad.

I just wonder if the $10 price difference is going to be adjusted before launch, and make a big difference for fans of the series; or if it will make for the first Just Dance title to release at $49.99, and perhaps future Just Dance games will continue to release at that price as well?

If you're a fan of the Just Dance series and planning on buying a Wii U, do the extra Wii U modes in Just Dance 4 and the option to play off of just the Wii U GamePad make you likely to buy the game?


You can see games from the Just Dance series linked below:


You can read older data reports on Just Dance, Just Dance 2, and Just Dance 3: here, here, and here.
Posted by coffeewithgames at 10:00 PM