Wario Land: Shake It! was released for the Wii on September 22, 2008 in the U.S., and was developed by GOOD-FEEL and published by Nintendo. The game released with a MSRP of $49.99, and it received an ESRB rating of "Everyone" with "Comic Mischief, Mild Cartoon Violence" listed as content for gamers and parents to be aware of. 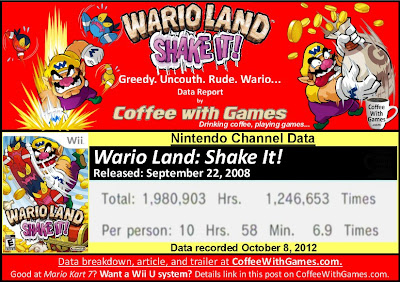 The Brew
Wario Land: Shake It! has approximately 180,674 U.S. Wii owners that reported gameplay data for the game, with over 4 years of data possibly reported. Players have reported 1,980,903 Total Hours of gameplay since the game released, with the total average play-time being 10 Hours 58 Minutes "Per person" and the average play-time per day/session being about 1 Hour 35 Minutes.

Was Wario's return to console platforming, after more than a half-decade absence, received well by critics and customers? The game has a "professional" critic review score average of 77.70%, based on 43 reviews on GameRankings.com. The customer review score average for Wario Land: Shake It! is 81.87%, based on 64 reviews from Amazon.com.

I think based on the average hours reported "Per person" that Wario Land: Shake It! would be a good choice for a Nintendo Selects title, but being that it hasn't happened yet, and with the Wii U releasing in just over a month, I don't think Nintendo is going to do much with the Wii anymore.

Perhaps we can hope that Nintendo will add Wii titles to the Wii U's eShop? I hope so, and not just for Wario Land: Shake It!, but also for Wii games like Pandora's Tower that never released for North American Wii owners.

(If you're looking for the Wii U giveaway contest, you can find the details HERE.)

Questions
Did any of you play (and beat) Wario Land: Shake It!, and if so, how many hours did you get out of it? Is it a one-time play-through  and then not much to go back and play again, as the reported average here might suggest?

If you have played Wario Land: Shake It!, do you think it would be a good choice for a Nintendo Selects title, and/or a possible Wii U eShop game in the future?

You can see Wario related games below:

Posted by coffeewithgames at 3:27 PM