Dead Rising: Chop Till You Drop(DR:CTYD) was released on the Nintendo Wii on February 24, 2009.  It was a port of the Xbox 360 game, Dead Rising

, that was released on August 8, 2006.  I believe the Wii version released with a MSRP of just $39.99, instead of the normal MSRP of $49.99 most "new" Wii games receive.
How many hours have Wii owners spent in the mall with Frank West, slaying zombies?  The game-play data below is 581 reported days of game-play, since the game released.  Let's take a look...


Game-Play Hours Reported:
Dead Rising: Chop Till You Drop has 467,860 Total Hours of game-play reported, with an average play-time of 11 hours 45 minutes per person reporting data.
Each play session for DR:CTYD lasts about 2 hours 12 minutes, per person reporting the data.


Review Score Averages:
As the image above shows, Dead Rising: Chop Till You Drop wasn't received very well by the "professional" gaming press, having a review score average of 62.08%, based on 25 reviews on GameRankings.com. 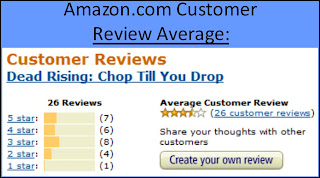 Thoughts:
The whole reason for this post is because Dead Rising 2 was released yesterday for the PC, PS3, and Xbox 360, but not for the Wii.  I thought it was interesting to see how much Wii owners had been playing Dead Rising: Chop Till You Drop in the last year and a half, since it released.
I have not played DR:CTYD, but I remember reading the comments and watching different videos showing how it seemed the game wasn't up to "par" with some PS2 games, as to how many characters were displayed on the screen at one time.
After DR:CTYD released, I didn't really hear much about it after the initial reviews were written.  I have seen a few comments from readers on other sites, and they seemed to have enjoyed the game and thought it was good fun.
I just wonder if it will take Capcom nearly 3 years to port Dead Rising 2 to the Wii, like they did with the original?  It seems like porting can be done to the Wii more easily now, but perhaps Capcom is another publisher that doesn't think the "Mature" rating would help it sell on the Wii?
Questions:
Has anybody played Dead Rising: Chop Till You Drop?  If so, what did you think about it?  If you're a multi-console owner, did you purchase Dead Rising 2 yesterday, and had a chance to play it?
Posted by coffeewithgames at 4:17 PM