Coffee Beans:
Well, another year has passed, and today(technically yesterday) was Thanksgiving.  I hope that you all had a good Thanksgiving, and perhaps an excellent Thanksgiving meal at some point today.
I started a pot of coffee when we woke up this morning, then fixed another one early in the evening; and I was even able to play some Call of Duty: Black Ops multi-player for a little while today.
Mrs. CoffeewithGames and I spent the day relaxing at the house with our son, and Mrs. CwG prepared us some excellent food:  turkey, green bean casserole, baked macaroni and cheese, mashed potatoes, rolls, cherry pie, and of course canned cranberry sauce! 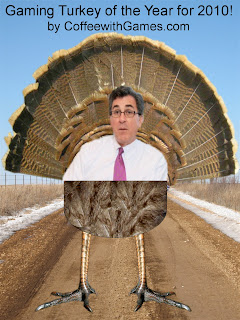 ...Michael Pachter!
Why does Michael Pachter get the 2010 Video Game Turkey Award?
Well, here's a partial list of things that Michael Pachter said/did in 2010, that caused uproars in video game communities:
January 2010 - Pachter started off 2010 with a prediction, continued from 2009, that Nintendo would introduce the Wii HD.
May 2010 - Michael Pachter spoiled David Jaffe's new Twisted Metal game appearance before E3, even causing David Jaffe to "lie" about the issue.
July 2010 - Pachter said Activision should charge for Call of Duty's online multi-player.
November 2010 - Mr. Pachter had another comment in an interview, that set message boards and comment sections on fire on certain sites; he said, "I use the press to promote myself..."(this was a three page article/interview, and that one line is what everybody focused on)

Those are just four quick examples of where Michael Pachter said something in 2010, and the results of what he said caused him to get baked/fried/roasted in the comments sections on video game websites.
I even take issue with things Michael Pachter says, and wrote a post about it titled, "Analyzing the Analyst: Michael Pachter is Wrong", earlier this year.