Coffee Beans:
Wii Party was released on October 3, 2010, in North America; with a MSRP of $49.99.  Wii Party was developed by Nd Cube and Nintendo EAD, and published by Nintendo.

The debut game-play hours below are for the United States of America Wii owners, not world-wide.  So, from October 3 through November 1, how many hours did Wii owners party with Wii Party?  Let's take a look... 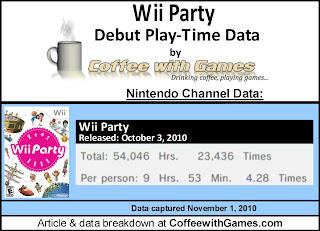 Approx. Number of Players Reporting Data:
Wii Party had 5,475 Wii owners reporting their play-time data, for its debut on the Nintendo Channel 30 days after it released.

Amazon.com shows Wii Party having a 4 out of 5 Star rating, based on 20 customer reviews.
You can see the customer review score breakdown in the picture below: 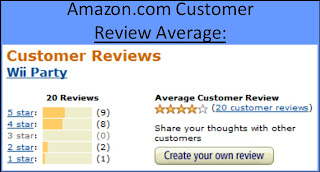 Thoughts:
For data comparison, Wii Party took 14 days longer than Kirby's Epic Yarn did, to have data debut on the Nintendo Channel.
I have not played Wii Party, and I don't plan to play Wii Party.  Mrs. CoffeewithGames got us started with the Rayman Raving Rabbids party mini-game games, and we own the first three in that series.  I personally don't see what Wii Party offers, to justify spending $50 on it at this point.
I have stated before in a discussion of Wii Party on another site, that I feel like Wii Party is a game Nintendo has had sitting around since 2007 or 2008,  just waiting to release it with the "Wii" name hoping it would sell tons.
The reason I think Wii Party is an older game that has been sitting around, is because Wii Party doesn't have online functionality of any sort, doesn't use the Wii Balance Board, and most importantly, it doesn't use Wii MotionPlus in any way.  It just seems really odd to me, for Nintendo to release Wii Party this far into the Wii's life cycle, and it not use any peripheral that's been out.
The fact that Kirby's Epic Yarn debuted faster than Wii Party, makes me wonder if perhaps Wii owners aren't really into Wii Party...or perhaps it will end up being a huge Christmas gifted game, and the hours will improve slowly but surely.

Questions:
Have any of you played Wii Party?  If so, what do you think of it?  Is it worth the $50 if you already own other Wii party games?


If anybody is interested in Wii Party, you can see prices for it on Amazon.com linked below:

Posted by coffeewithgames at 11:00 PM