Today, being Thanksgiving, many gamers sat down with family and friends to enjoy a Thanksgiving dinner, and many of those dinners probably had turkey as the main meat of the meal.


How is it, that turkeys seem to be loved most by Americans, only after turkeys have been baked/roasted/fried and are being eaten off our plates, instead of when they're flying around, gobbling, or running like crazy?

I think the same sort of thought pattern happens in the gaming world.  We tend to favor certain gaming companies, whether it's Microsoft, Nintendo, or Sony.  If you game, you probably have a favorite console or gaming company.

Though we may enjoy the games and consoles, I would say gamers don't always agree with every decision a gaming company makes, or sometimes with what a representative may say.  Instead of enjoying the companies flying high, we prefer to roast them with our words, like many turkeys on Thanksgiving are roasted in ovens, when the gaming companies do or say something we don't agree with. 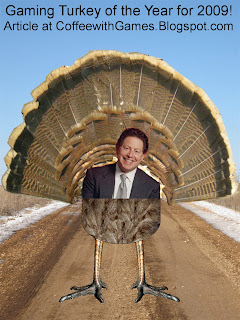 Why does Bobby Kotick get the 2009 Gaming Turkey Award? Kotick seems to be the man in the gaming world that was roasted more than any other, and mostly because of things he has said.

Two Famous 2009 Bobby Kotick phrases:
When questioned during a conference call: "...if you don’t mind, just your comfort level regarding pricing of some of your new games that have some expensive controllers and any feedback that you had from retail as we move through the holidays. Thanks, guys."
Bobby Kotick's reply: "And Tony, you know if it was left to me, I would raise the prices even further."
A Kotaku.com article said this, "Speaking at the Deutsche Bank Securities Technology Conference in San Francisco yesterday, Kotick said, "The goal that I had in bringing a lot of the packaged goods folks into Activision about 10 years ago was to take all the fun out of making video games."

Do you agree or disagree with this choice?  Leave a comment and let me know who you would choose!

Posted by coffeewithgames at 1:49 AM